How to transport bulky roof insulation 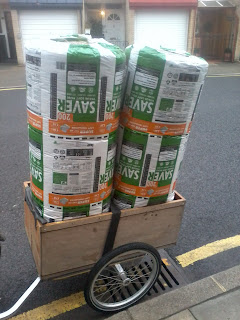 Posted by Charlie Holland at 22:05

Is that a Carry Freedom Y-frame nestling under that box?

I have a CF Y-frame Large and it's excellent. Not perfect, but it's the best trailer I've had. It's No.3.

That's the one, and I agree they're excellent. The box is an old shelving unit someone had fortuitously dumped near our house just when I was looking for a box that exact size!

I notice your dust caps seem to have become lost. I already knew about the dust caps falling out when I bought the trailer, so I secured them with cable ties in a figure of eight configuration tucked behind the spokes and that cross over at the caps. So far I still have mine, but I'm pretty certain they'd have been plucked-out by brushing past posts etc.

So far, I've only had good cycling experiences with the trailer. Drivers seem scared of it and keep well away, which suits me.

It's so stable, that I've transported bikes on it, using a bike carrier for roof bars. It's bolted to the load-bed.

I also have the 1.9 metre extension arm, which surprisingly came with the elastomer hitch. This means that until I replace it with the standard hitch, I have to swap hitches to use it. Despite this minor inconvenience, I find it useful for long loads. It's meant to be suitable for loads up to 2.5 metres long (and it is), but I've successfully carried wood up to 3.6 metres long. But care would be needed. I would out of preference choose a quiet / off-road route.

Agree with deploying cable ties to retain dust-caps and also keeping bail-clips with the trailer!

Keep closing up the hitch plate "J" on the bikes.

Check the security of the hitch swivel lock-nuts!

Beware chicanes on Burntwood Lane and speed-bumps on fast descents!

Can the elastomer hitch be retro-fitted?

The coupling end of the standard trailer arm has a single through-drilling which suits either the metal coupling or the elastomer coupling. They are quickly and easily interchangeable. Each coupling has its own corresponding hitch that fits on the bike. However the metal coupling is not physically compatible with the elastomer hitch and vice versa.
Logically this makes sense. Any arm fits any coupling, which cuts-down on parts and stock.

This extension arm is the one needed to loads up to 2.5 metres / 8 foot long. It is the one that would be needed to carry bicycles.

charlesb
A picture of the bike carrier in use here: http://i54.tinypic.com/1o1tw3.jpg

Essentially, the bike carrier is a bog-standard bike-carrier that is typically mounted to roof-bars.
I bolted it to a plank to provide torsional and longitudinal stiffness at the overhangs fore and aft. The plank is through-bolted to the centre-line of the trailer load bed. Because the trailer should be loaded so it's nose-heavy, I took care to establish the location of the centre of gravity by finding the balance point of the cycle on the carrier. I then mounted the carrier so that the C-o-G was forward of the axles by ~15-20 cm. I found this made for good handling. This location may vary with the bicycles you intend to transport.

I use a lever-ratchet-strap tied to the crossbar via a clove hitch to tie-down the frame to the carrier an alternative might be a waggoners' hitch. The carrier also has a clamp for the down tube, for which I recommend a clean cloth to prevent fretting and paint damage. I also use the two wheel ratchet straps that came with the carrier. Note: Carrying bikes will require the use of the 0.9 metre extension arm. I bought mine from Rutland Cycles, but more Carry Freedom dealers offer the accessories than was the case when I bought mine.

Amoeba, thanks very much for the details and photos of bike carrying. I'm looking to do this, but hopefully with two bikes to a trailer bed.

In this one the bikes are mounted too far back and would lead a negative load on the hitch and to bad handling. Uses the standard trailer arm. Probably OK for very short distances, but not recommended & contrary to the trailer manual. The manual says: "Keep the trailers centre of gravity lower than 0.6m, and in front of its axle."

Image:
http://www.carryfreedom.com/images/P_C_TourBike.jpg
This one seems to use a special trailer arm, intermediate between the standard and the 0.9 m extension arm.
This also has a plastic tray under the trailer bed for tools underneath.