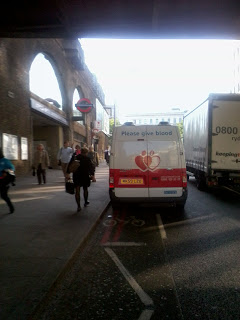 'Please Give Blood' is the appeal on the back of this NHS van (MK59 LZU) parked on Tooley Street outside London Bridge Station with its hazard warning lights on shortly before 4pm today, enticing cyclists to nip out into the general traffic lane.

The van's in the mandatory cycle lane ('You MUST NOT drive or park in a cycle lane marked by a solid white line during its times of operation' - Highway Code 140) on a red route marked with double red lines ('no parking at any time'). 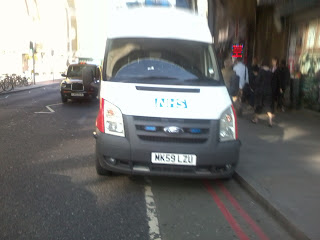 There is no driver in the van.

It may be that the NHS has special dispensations that permit its vehicles to be parked in such a way as to encourage cyclists to mix it with the lorries and taxis. Even if they do I bet there's somewhere else the van could sensibly be parked at London Bridge that doesn't place the vulnerable road user at risk.

Maybe that's the intent though - the NHS wish to increase the demand for their services by upping the numbers Killed and Seriously Injured while also discouraging others from healthy lifestyle options that put health care professionals out of work?
Posted by Charlie Holland at 17:12