Not planning for a cycling revolution in Vauxhall, Nine Elms, Battersea

Last week I wrote about a planning proposal for a new primary school, at the Vauxhall Gyratory end of the Vauxhall, Nine Elms, Battersea (VNEB) Opportunity Area, to which no children are expected to cycle, despite Boris Johnson's statement that this area will be more cycle friendly than Amsterdam.

Bordering the other end of the Opportunity Area, Wandsworth have just granted planning permission for the St John Bosco College for 11-18 year olds to move into the former Salesian College site by Battersea Park .

The exact location is shown in red below, in the vicinity of the Royal Academy of Dancing, Health Centre, College, Sports Centre, and two other schools. The map also shows suggested cycle routes, one of which is Cycling Superhighway 8. This flat area must clearly be an incredibly splendid cycling location, and, yes, you can cycle through Battersea Park, away from the traffic, though it isn't shown as a cycle route for some reason. 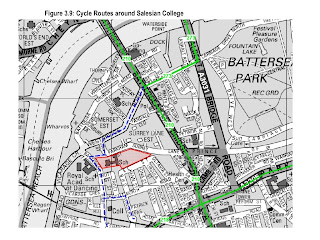 Let's look at the planning application's Travel Assessment to see the projected number of cycle trips resulting from the 1300 pupil secondary school and 110 staff, and the occupants of 104 new homes, the majority having two bedrooms and presumably children living there:.

On weekdays just 30 out of 1500+ people, the vast majority too young to have a driving licence, are expected to cycle, with no-one cycling on Saturdays. I agree 'it is likely these possible figures could be higher for the Saturday results.' as they couldn't possibly go any lower than none.

The map below shows bus routes and red boxes according to how many pupils come from where. Over the near future the number travelling from the existing site near Putney will decline and the red boxes nearer the new site will increase. 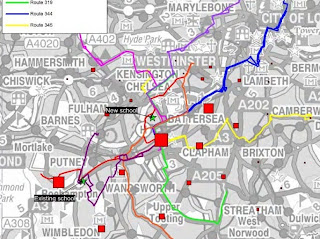 How are the 11-18 year old school pupils expected to move around? 2% are expected to cycle, the same percentage as arrive by car.. 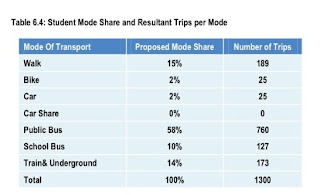 68% however are expected to use one of the 110 buses per hour that run in the vicinity of the school. 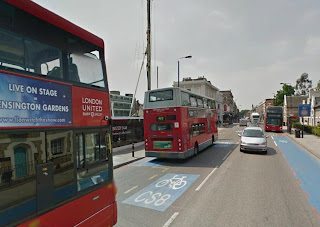 For secondary schools with similar public transport provision in Wandsworth the picture is similar: 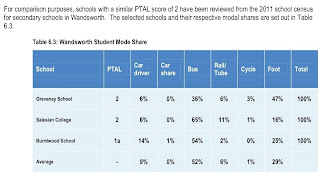 Perhaps a clue to the low number cycling is within this statement,


'Information of cycling will be provided on the school website and notice boards. This will include the free cycle training offered for those over 16 years old who live, work or study in the borough.'

Maybe if you're under 16 you're considered too young to cycle to school?

They're almost certainly right if the pupils are expected to share a cycling superhighway with the best part of 110 buses an hour. Could the cycling infrastructure be at fault?

The Travel Assessment does makes some recommendations for potential improvements that could be provided as part of the development:- providing contributions towards the improvement of local peak hour bus services and better pedestrian crossing facilities to improve pedestrian safety to and from the local bus stop. There are no recommendations for contributions to cycling.

Posted by Charlie Holland at 13:33