Sainsburys Nine Elms Vauxhall has a large noticeboard in its entrance lobby about the imminent temporary store that will replace the big one while it is being rebuilt. 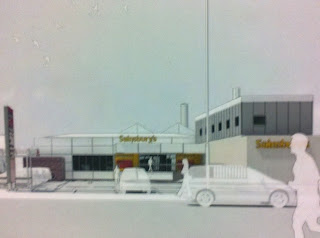 I can't help but doubt that Sainsburys shares the aspiration of Lambeth and the Mayor of London that this area will be super cycling friendly - in fact 'Better than Amsterdam - from that sketch and the accompanying Access information: 21 car parking spaces is way fewer than the existing store's several hundred spaces, plus the petrol station is closing, so this is presents a classic opportunity for Sainsburys to give a nudge to those currently shopping by car to switch to shopping by bike instead of losing these customers to a competing supermarket with a big car park.

The first thing to do is to ensure some cycle parking will be provided and tell people about it. But that's just a start. Don't show images like that above, but instead add lots of images of people shopping by bike; put panniers on sale by the tills, or whole shopping bikes ready equipped with rack, panniers, dynamo lighting and locks; give vouchers with the till receipts and petrol receipts offering a deal at local bike stores; and another voucher promoting Lambeth Council's free cycle training; run a Dr Bike in the existing car park and encourage drivers to bring their bikes to get them sorted ready for the big switch.

It's a real shame that the developers holding such sway here aren't pulling out every stop to nurture cycling as an everyday, efficient and less polluting means of transport in this area, right from the outset.

Posted by Charlie Holland at 23:13