Planning with our children in mind

The tragic deaths and injuries to people riding bikes and walking in London over the past week will have put a huge dent in the Capital's aspirations to get more people undertaking active travel.

We must not turn our back on these aspirations, because nurturing active travel is the easiest way to reduce congestion, tackle public health problems, cut CO2 and air pollution, improve people's finances and create a less noisy, calmer environment all in one. In short, create a more liveable London.

It is absolutely crucial that all parties involved in use of, or management of, the roads pull out all the stops to make our roads safe for adults and children to use, but I saw yesterday how far we are from that.

Around school ending time, I rode my bicycle along a short part of Lambeth's London Cycle Network route 3 (LCN3) from St Mark's Church of England  Primary School next to the Oval cricket ground up towards Oasis Johanna Primary School by Baylis Road in Waterloo.

London Cycle Network 3, mainly on back streets and with segregated space for cycling on busy streets, should be a prime example of a child-safe cycle route - important given that Lambeth Council intends the borough to be London's most cycle-friendly borough with cycling to school the norm. 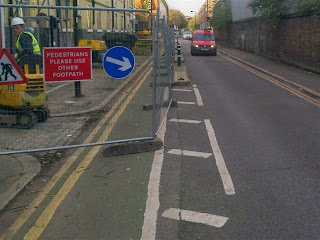 On Baylis Road a delivery driver (employed by Kuehne and Nagel to deliver on behalf of Whitbread to, I suspect, Whitbread-owned Costa Coffee) had decided it suited him/her to park the lorry in the child lane forcing them to share the lane with lorries like the one passing 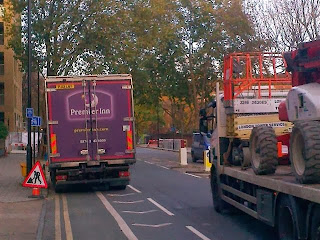 I took the photo above at 15.10 and the lorry, below, was still there on my return at 15.26, still in the cycle lane on the double yellow no-parking lines right by the no-loading lines. 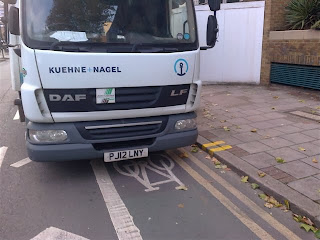 A little further along the road, construction work has led to the closure of the pavement, but an alternative has been found - the child lane can be closed:. 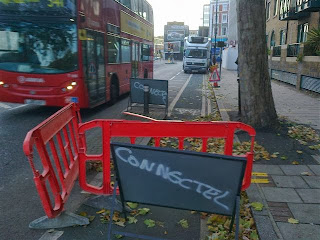 This allows the child lane to be taken over for pedestrians, while the children gather their wits about them (TM Boris Johnson) and jostle with the buses, vans and lorries. 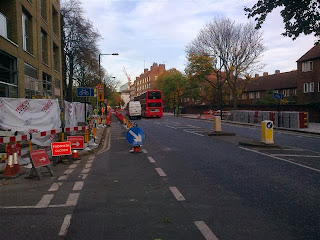 On the other side of the road a driver for the official London Highways Alliance has decided to park his van to block the child lane. Clearly concerned that his van may be damaged by children who have not noticed his parked van, the driver has taken prudent precautions: 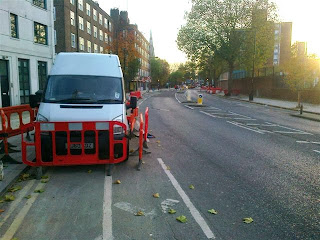 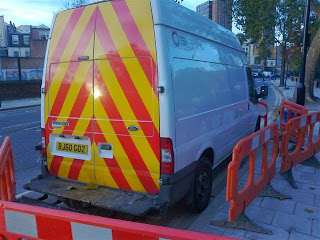 Could not the multitude of fencing have been put to better use by creating a child lane diversion around the van?

In the light of the appalling deaths and injuries this week,  I'm inclined to suggest that the professional, trained adults responsible for all the decisions above are guilty of child abuse.

After all, through their actions they either;
a) deter parents from letting their children cycle, impacting on their mobility, health and the planet they will continue to live on after us
or
b) place those children who do cycle in clear and evident danger.

It need not be like this. David Hembrow gives the Dutch example http://www.childhoodfreedom.com/ . In the meantime it is up to all of us to challenge the shoddy behaviour such as that I show above. To this end, I must commend Richard Ambler, Lambeth's Cycling Officer, who sent the following email to a colleague in Highways as soon as I sent him photos of the contra-flow blockage in Vauxhall Street:

I have been sent the attached photos of Vauxhall Street. They show that the contraflow cycle lane is completely  fenced off, forcing people on bikes into the narrow lane of oncoming traffic. Not only is it dangerous, especially to children using the route,  it is also inconvenient and increases journey times for people cycling.
Given our road user hierarchy, our approach in this situation should be to maintain the pedestrian and cycle routes and close the road to motor vehicles except for access to the supermarket and estate.
We've been criticised in the past for our lack of consideration of cyclists at roadworks (Akerman Road; Baylis Road; Greyhound Lane) but I thought we had begun to remedy that. There are lots of examples of good practise regarding cycling at roadworks  across London which we could learn from, for example recently on Union Street outside Palestra.
Will you look into this urgently? It is important that we sort it out quickly as the current situation is unacceptable and I expect we will receive many more complaints.

I wonder if his colleague arranged for the hazard to be removed today?