Please take one moment tonight to complete a TfL consultation survey
https://consultations.tfl.gov.uk/cycling/cs-5-harleyford-road  giving your views, even if a one line 'I support TfL's plans', on the proposed Cycling Superhighway 5 route (blue below).

I'd also strongly suggest that you also ask TfL to REJECT the plan in red below, submitted in a letter by the Chair of the board of the Kennington, Oval, Vauxhall Forum, which proposes that CS5 diggles around the back of the Oval, along the Inner Ring Road (Kennington Lane), across the road and behind the Royal Vauxhall Tavern then over the bridge. 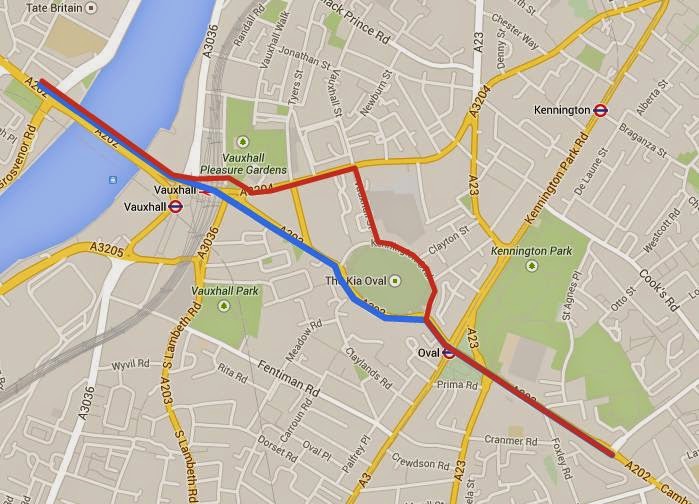 Re: CS5 consultation on Harleyford Road
Further to our earlier correspondence, I would like to raise a number of points, many of
which were brought out at our Public Meeting you so kindly attended.

As you are aware, the Kennington, Oval and Vauxhall Forum (KOV) is a volunteer
organization supported by a small grant from Lambeth Council. It has several objectives
including Neighbourhood Planning and helping to deliver local consultation by using
local networks (whether Friends of Parks, Libraries, Residents and Tenants
Associations etc.) to increase the reach and deliver rounded feedback. We have
accumulated a database of some 500 email addresses. We also work closely with
businesses in the area, having on our governing Board, two members that represent
Vauxhall One, the Business Improvement District for our area.

This letter has been prepared with the input of a number of people and local groups we
represent and has been possible as a result of significant work by many in the area
thinking through the consequences of the proposals.

We acknowledge that TfL has done a lot to improve the scheme since the original
consultation. However, having listened to the feedback of our members and others
locally, KOV does not support the current approach to CS5 along Harleyford Road for
the following reasons:

• Increased journey times for all road users (except cyclists) and pedestrians
too.
In particular, an adverse impact on thousands of bus users heading from Oval towards
Vauxhall and beyond The section of road from the Oval to Vauxhall (Harleyford
Street/Kennington Oval/Harleyford Road has a bus lane servicing bus numbers 185, 36
and 436. At peak times, 21 buses per hour take advantage of the bus lane – say up to
2,000 passengers per hour. The current CS5 proposal will effectively make the 21
buses per hour heading for Vauxhall join a stream of relatively slow moving traffic. Not
only would the buses be significantly slowed so too would other traffic.

• Increased C02 emissions and reduced air quality resulting from the traffic
sitting idle for longer periods of time.
Stationary traffic, e.g. cars with engines idling at lights, contribute approximately 1.2g
per minute CO2. The removal of the bus lane will result in increased congestion and
delays on most journeys thus increasing carbon emissions.

• Adverse economic impact
TfL has a responsibility to deliver the most efficient and effective usage of the roads
under its jurisdiction to allow the safest and most economic travel for all. With the use of
additional fuel consumption as a result of vehicles going longer distances and sitting idle
as well as loss of time for everyone other than cyclists, this is not an efficient solution for
the London economy.

• Increased risk of accidents and congestion on other local roads
Rat-runs are likely to increase, particularly Fentiman Road, for cars trying to avoid
Harleyford Road.

• Severe problems outside the Royal Vauxhall Tavern (RVT)
In this latest design, we recognise that TfL has made efforts to mitigate the risk of
conflict between pedestrians and cyclists at the RVT junction but the design still falls
short of what is needed. For example, cyclists wishing to stay on the left hand side of
Vauxhall Bridge will continue to cut through the pedestrian tunnel on the station side.
Had CS5 continued on the other side of the road under the viaduct before crossing over,
more cyclists would have the option to avoid the pedestrian tunnel. A further limitation
of the design is the one-way routes on the CS5 around the viaduct. These do not reflect
how cyclists will behave and are at odds with proposed two way working. We would
expect the majority of cyclists currently going under the viaduct to turn right into South
Lambeth Road. Only a minority will use the pedestrian tunnel on the RVT side.
It is a feature of CS5 that cyclists will be able to reach relatively high speed along the
Harleyford Road stretch of the superhighway heading towards the RVT junction. In spite
of the mitigation measures, we would expect cyclist/pedestrian collisions to be
inevitable. At best, it will create severe conflicts. We believe that the design can be
improved significantly by taking into account some of the ideas put forward by the
community. A more modest cycle lane provision that does not encourage high speed
cycling would help.

Furthermore, the consultation has highlighted some severe inconsistencies:

1. CS5 does not address the concerns of most local cyclists when
approaching the Vauxhall Gyratory.
A majority of cyclists use the gyratory as an interchange with South Lambeth Road
rather than Harleyford Street. My fellow KOV Board Member, Michael Keane was kind
enough to run a brief survey on Friday 12th December to record travel and his results are
appended to this letter showing the need for a better link between the Gyratory and
South Lambeth Road. This evidence is further supported, in that sadly, the most recent
cyclist deaths, related to problems with South Lambeth Road where it meets the
Gyratory at Parry Street.

2. CS5 is being introduced out of sequence with other changes proposed to
the Vauxhall Gyratory
The current proposal does not take adequate account of the proposals to reverse the
mini Gyratory suggested as part of the ‘Transforming Vauxhall’ consultation. If the
proposals for the Gyratory were implemented, the CS5 suggestion to relocate a bus stop
to Durham Street becomes problematic, and the investment in a floating bus stop no
longer makes sense on Harleyford Road.

3. Inadequacies of the consultation process
As a forum, we naturally take consultation very seriously. We are concerned to note that
our area seems to be given less choice than other local consultations and insufficient
evidence to justify the benefits or otherwise of the proposal. Key differences between
the CS5 consultation and others we know of is explained here:
• TfL’s consultation for Stockwell Cross helpfully provides additional information on
the traffic impacts that the scheme might have – when the hyperlink is viewed it
shows pedestrians crossing the area, bus journey times and car journey times at
peak flow in the morning and the evening. Yet this data is not supplied by TfL to
show the likely impacts of CS5.
• During the earlier consultation on CS5, residents of Belgravia were given a
choice of routes to consider. The residents in Oval have not been given a choice
– other than which side of Harleyford Road it could travel.

4. An alternative route proposed by residents merits further consideration
and consultation
As you are aware the residents of Harleyford Road have prepared an extensive critique
of the CS5 proposals and the disadvantage it puts on local residents, particularly the
restriction on receiving deliveries or any other emergency needs. The residents have
also outlined their concerns over HGV transport at the interchange with Durham Street
as a result of reduced road widths.
Additionally, the residents of Ashmole Estate have made representations about the
spacing of bus stops and the removal of one on Harleyford Road and placing it on
Durham Street. For the elderly and infirm coming from the Estate every pace makes a
significant difference to their travel time.
There is an alternative proposal to put the Cycle Superhighway around the back of
Kennington Oval and through Vauxhall Street, which is a very quiet road where there is
already a segregated cycle lane, and onto Kennington Lane. Although not suggested by
residents, there is the potential then to allow the cycle lane to run along the edge of
Vauxhall Pleasure Gardens towards the river (behind the RVT). This proposal merits
serious further consideration if CS5 must be delivered.

Additionally, KOV as you are aware has produced a proposal for the Vauxhall Gyratory
which was presented at our meeting on 9th December. This proposes closing off South
Lambeth Road to through traffic. This road closure would make this a much safer route
for the majority of cycle journeys.

We welcome better provision for cyclists in our area and trust you will consider these
alternatives as a more cost-effective and improved offer.
Yours sincerely,
The Chair of the KOV Forum
Posted by Charlie Holland at 21:05