There is a consultation open until 21 December on the Baylis Rd / Waterloo Rd junction. Please read this blog and respond proposing what I suggest, or similar.

My mother rang me from the top deck of a bus some twenty minutes after we'd left the theatre on Strand. I had cycled home but she was still on Strand, her bus stuck behind an endless sea of black cabs, many empty.

I was reminded of this yesterday when I attended an Urban Design London course that looked at the junction of Baylis Road and Waterloo Road and the difficulties of creating a satisfactory cycling Quietway on this designated route, a B road used by a considerable number of commuter cyclists, buses and taxis.

The Quietway at this point is part of Lambeth's flagship London Cycle Network route 3. Approaching the junction with Waterloo Road you cross a taxi access, and most taxis here are empty or have just one passenger - hardly London's mass transit solution: 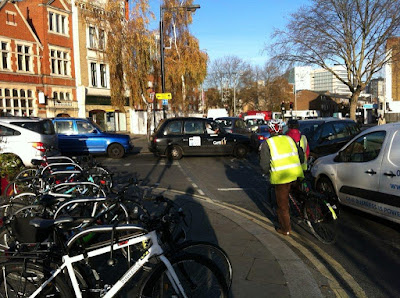 From here the cyclists move across the Keep Clear area to the cycle lane you can just see between the two vans, to access the Advanced Stop Line at the traffic lights. The traffic lights may turn green as the cyclist approaches, which presents a challenge if s/he wishes to turn left. 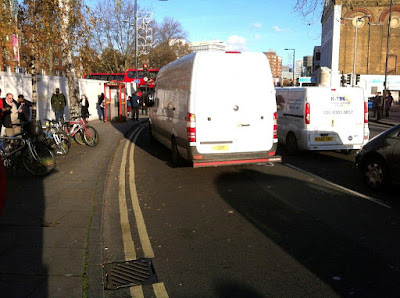 You can see why it needs to be upgraded to become a Quietway for 'Near Market' cyclists ( think taxi users who don't currently dare cycle in London and children going to secondary school who have undertaken on-road Bikeability cycle training in Year 6 primary).

The plan out for consultation until December 21st looks like this: 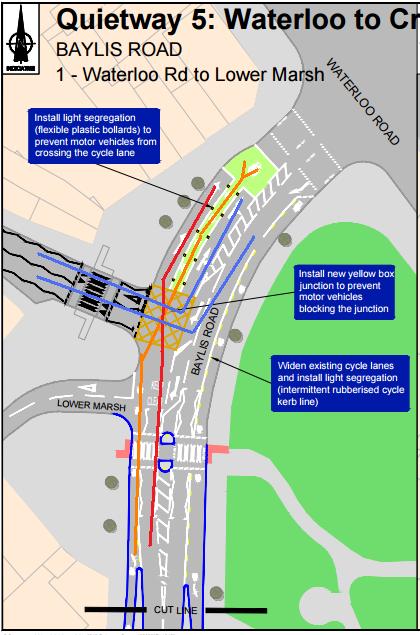 Yes, it's the same bar a minor detail or two as before.

The 'near market' orange cyclist riding up the Quietway emerges from the left hand semi-segregated cycle lane and still crosses to the green lane in the middle as some red motor traffic (many buses) from the general traffic lane crosses, contra-wise, to the left hand lane. Blue taxis emerge from or enter the side road across the hatched yellow box.

No-one felt this was a good scheme, but the engineers had failed to come up with something better.

Last night I think I did, and I'd like you to propose this, or similar, in your consultation reply.

Let's look at the context. The blue circle shows the junction and we are concerned primarily with the movement from the bottom left. The red lines shows the Quietways. The black lines show the principal taxi entrances and exits for Waterloo Station. The Green line shows the A road approach from the Quietway towards the Imax roundabout, for Waterloo Bridge or continuing across towards Blackfriars. 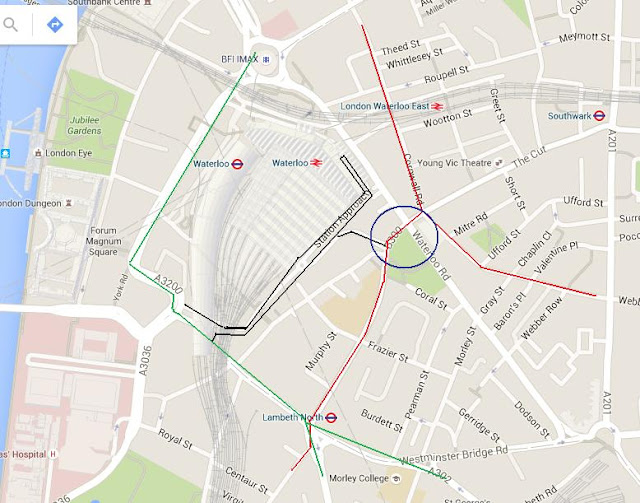 The first thing to note is that there is no need for general traffic making its way from Lambeth North to the Imax roundabout to use Baylis Road, a B road, and turn left at the end onto Waterloo Road. Any deliveries to that short stretch can be made by travelling up the Waterloo Road from Westminster Bridge Road or from the Imax roundabout.

Secondly, taxis have a traffic light controlled entrance and corresponding exit onto the A road, away from the Quietway. Why ever should we provide taxis, a hugely inefficient form of mass people transit, with two entrances and exits to the station, to the detriment of bus, cycle and foot journeys?

The overwhelming majority of people who take taxis could (my observation suggests) reasonably be expected and encouraged to use public transport, cycle or walk instead. People who need or wish to take taxis still have a perfectly adequate entrance and exit from the station.

We now have a segregated cycle track, shown in green below, running to the junction (stop line moved back to wider road width section allowing space for a traffic light island). There is a bus-only left-turn lane, shown in red, and a straight-on general traffic lane to its right. 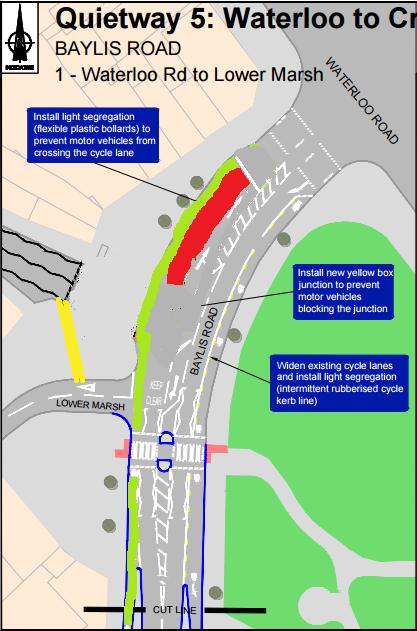 Cyclists then get a green to go straight-ahead or left at the same time as the general traffic gets a green to go straight ahead. There is no turning conflict for cyclists with taxis for Waterloo, nor at the traffic lights, and they get their own time on Waterloo Road separate from buses. (A two stage right turn into Waterloo Road can also be accommodated). This is a child suitable 'near market cyclists' Quietway design.

Cyclists can also have a Quietway link into and out of Waterloo via Lower Marsh (the yellow lines). There could be a larger cycle hire docking station here too.

Taxi users can still use Waterloo Station at the same cab rank. Some taxi journeys may be a tad longer to exit the station, but I think that's acceptable given their relative inefficiency as a mass form of transport.

Finally, let's look at how this matches up to Lambeth's Transport Plan (2011): 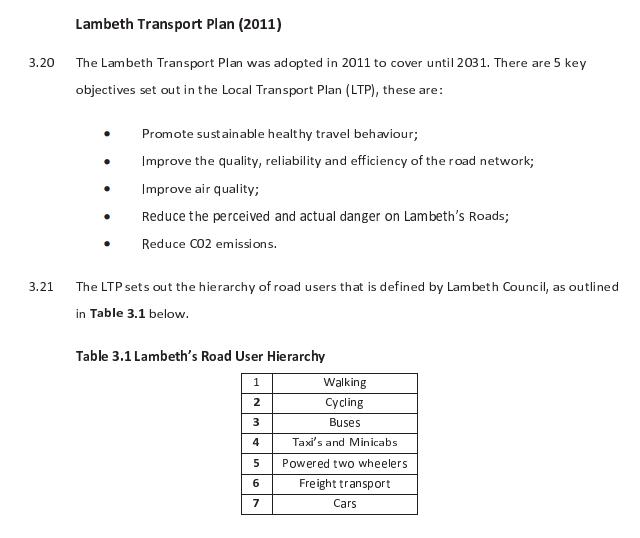 The scheme ticks the boxes. Please respond to the consultation NOW proposing an alternative along the lines I set out is provided.

UPDATE
a) I estimate that there is room for the necessary traffic control islands if the stop line is roughly where the line is for the existing ASL (i.e. where motor vehicles currently stop on red)

b) This  TfL PDF gives some interesting information on Taxi use: 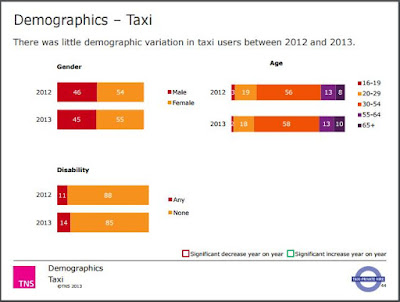 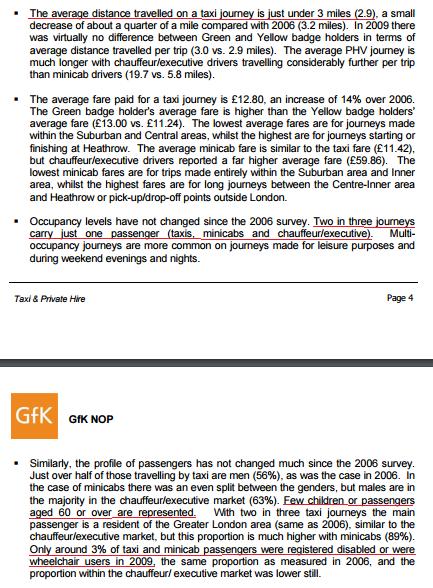 c) From the comments below, there appears to be a clear opportunity to avoid wasting drivers's time in the station through providing a drop off point or two outside.

Posted by Charlie Holland at 11:34