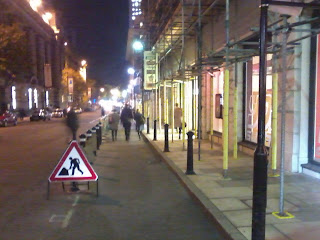 Shirayama, who own the former County Hall and the part of Belvedere Road behind it, started to install bollards recently as their plans showed. It was unclear from the plans where cyclists are intended to be, though it seems likely it's the narrow road section you see being used by the pedestrians above, and the workers unloading the van below. 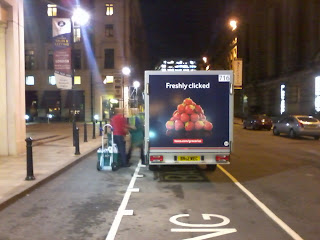 A week ago I wrote to Phil Ardley, who I understand to be the responsible person for Shirayama, and, on chasing him yesterday, was told that "we are currently in consultation and will update you on any developments." I believe work has now stopped on site. Let's keep our fingers crossed that the bollards will be removed.

Here's the letter I wrote. I'll let you know the answers I get.
I have been sent the illustration attached by Lambeth Council. Can you please clarify for me:
a) the approach from / exit to Westminster Bridge Road seems unalterered, though this is considered poor by local cyclists, particularly for a National Cycle Network route. Are there plans to improve this to avoid potential pedestrian/cyclist conflict on the County Hall side, and are there plans to improve the gap between the planters on the side nearer Yo Sushi and determine a way to avoid the necessity of cycling on the pavement there? The illustrations suggest there are not - if not, why not?
b) Where are cyclists expected to go in relation to the bollards being installed? If cyclists are intended to go in the 2m wide space (which seems very narrow if two way cycling is envisaged there) how will they emerge/get in at the Westmnister Bridge Road end? Will any of the bollards have chains between them? What is the purpose of the bollards? Will cyclists be permitted to use either side?
c) The approach from / exit to Chichley Street seems fundamentally unaltered in the drawing, though the barrier is shown down and bollards are shown on the pavement. Will the barrier generally be up? When it is down what is the approach/exit? Will the gap to one side of a planter nearer the County Hall side be maintained?
d) Are there plans to install any publicly visible and accessible cycle parking on the Shirayama owned land?