Day of the Dead and other rides for local pupils

Pupils from year 6 in local primaries and from local secondaries (esp yrs 7 - 9) are invited to join in the Pedal Power Rides at 3.45pm each Tuesday (Slow and Easy) and Wednesday (Further and Faster) at the Sports Pavilion by the pitches in Geraldine Mary Harmsworth Park. I can't speak for the pupils but I'm really looking forward to this series of rides:

Tue 15th November – Along the river towards Battersea
Wed 16th November – Canary Wharf, taking a ferry across the Thames 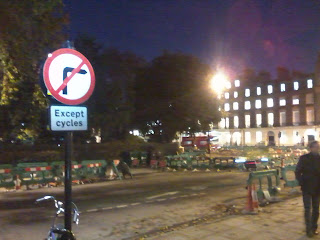 It's always entertaining checking the route in preparation. Our 'Day of the Dead' ride tomorrow could have had that literal outcome without a pre-check. The return route from Montague Place behind the British Museum would normally feature a right turn onto Russell Square, following the 'No Right Turn except cyclists' sign above. The sign remains but the cycle facility it leads to has been removed during roadworks and you'd be cycling into oncoming traffic. We've rerouted for tomorrow's actual ride. 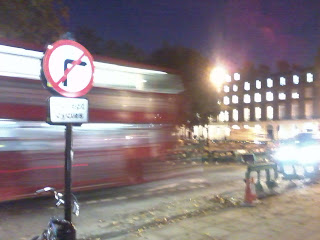 Update Camden Council have rapidly replied to my email re Montague Place:
I can confirm that the no right turn sign with except cycle plate at this location is correct. Unfortunately the associated road-marking has not been laid to compliment this and so there is potential for confusion.

Arrangements have been made for the markings to be laid tomorrow (Friday) to highlight where traffic is expected to be.

Posted by Charlie Holland at 22:57