I've managed to find out some more information on the proposed works. Please note that these works do not change the proposals in the masterplan for the area that I previously describe to you, which are to make Heygate Street a more pedestrian and cyclist friendly environment.

The proposed works are a solution to pedestrian access during the demolition of the existing estate and redevelopment. Demolition requires that the estate be secured around its perimeter, but this will result in loss of the pedestrian through routes that use the elevated walkways. However, there needs to be some east west pedestrian access due to the large size of the estate. Currently, as I'm sure you know, there are no footways alongside Heygate Street.
The proposals you have seen are to create a footway on the northern side of Heygate Street to create the required east west pedestrian permeability, albeit at the expense of the cycle lane.

I understand that Southwark Council discussed these works with Southwark Cyclists, who of course shared your concerns, but did acknowledge the difficulties the council is encountering in delivering facilities for both cyclists and pedestrians during demolition.

First off, the need for a decent pavement along here is totally valid.

Below are some ideas, though I haven't checked the details of what's intended to be built by the road or what underground pipes etc. are involved that may influence the line of the pavement.

The photos show where the cycle lane will remain just after the junction, where it will disappear under pavement, and where it will reappear shortly before the second junction. You will notice a straight line of trees - I don't know if some of these are destined for the chop but if not it seems reasonable for a pavement to continue in a straight line, retaining the cycle lane. 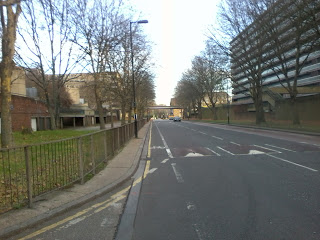 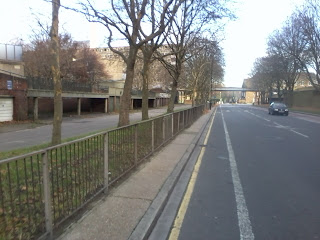 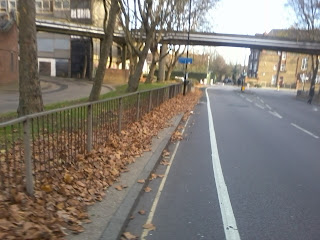 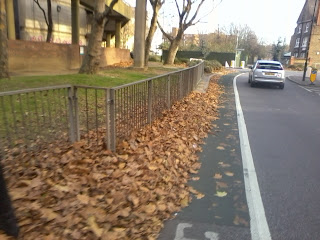 Presumably there are works that render a pavement in line with the trees impractical (though the plans suggest it's not the removal of the pedestrian flyover), hence the pavement buildout over the cycle lane.
I wonder (as someone who never uses this route in rush hour) whether it would make more sense to reallocate space for the cycle lane from the other side of the road, by removing the substandard cycle lane and making a narrower shared bus/cycle lane (as it is used in practice in my experience). The railings need to go too! 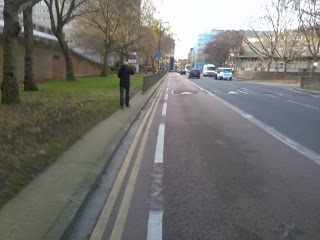 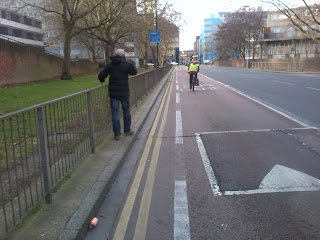 On a final note, I'm delighted the advertised scheme plans to narrow the turn into this side road, so traffic needs to slow to take the corner: 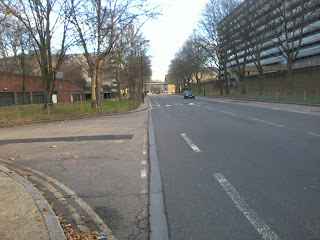 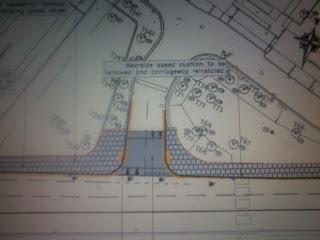 Posted by Charlie Holland at 13:22