Time to cut through the Vauxhall gyratory maze

On the 19th September Lambeth's full Council considers the draft Supplementary Planning Document for Vauxhall, before it goes out for statutory consultation later this year.

The briefing note to Councillors says what the most important in the view of the 262 people who filled in a questionnaire or a postcard at a public exhibition in March:


-People liked the existing parks and there were concerns that the quality of these needed protecting. ‘More or better open space’ was the most popular community benefit that people called for.
· People disliked the traffic and the road layout, particularly the gyratory, and felt the pedestrian experience was poor. Improving pedestrian and cycle routes was the second most popular community benefit that people wanted to see.

The problem with Vauxhall is that it's attempting to be an interchange for lots of motor traffic on lots of roads, and become a major residential, office and hotel centre with pleasant walking, cycling and public spaces. I don't think this can happen while all of these A roads meet at Vauxhall:

The plain and simple way of getting rid of the gyratory is to make the traffic sort itself out before it gets to Vauxhall, allowing it to flow smoother on smaller roads at Vauxhall, all of which we return to two way working. Let's not have every road meet at the one place as it does currently with a race track in the middle: 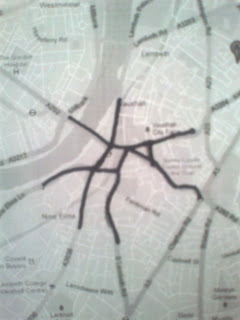 I suggest we remove South Lambeth Road and Parry Street from the Vauxhall equation, by stopping them up to motor traffic at Vauxhall, and hey-presto the gyratory's gone and we end up with a simple crossroads, two T-junctions, and more public space with better opportunities for cycling and walking. The roads that are closed to through motor traffic remain accessible by residents/visitors but become quieter, less noisy and polluted, and a more desirable place to live.

Bus stops can be located around the cross roads, keeping walking distances between stops short while making bus journeys more efficient because the buses needn't detour into the bus station and then go around the gyratory to where they're going. There can be an option worked out to retain buses using South Lambeth Road and joining Wandsworth Road or Kennington Lane. 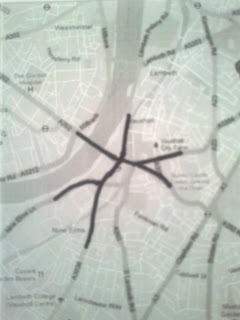 I don't see any other practical way for this location to become the home to thousands upon thousands more people, plus offices and hotels for thousands upon thousands more. These residents, workers and visitors will nearly all be getting around by public transport, foot or bike so losing the car space won't matter for them. And those, mainly outer, Londoners who choose to use cars can nip around the M25. After all, it was built to avoid the need to drive through the centre of London.