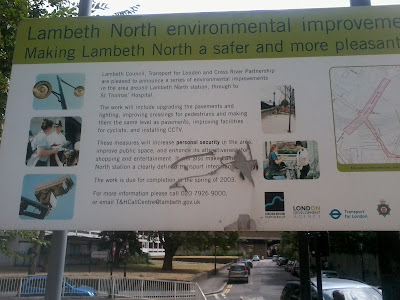 I spent quite a while today trying to work out a safe, direct, appealing and mellow cycling route for staff at St Thomas' Hospital to take to get to Guy's Hospital. I'm thinking of ordinary people, rather than Lycra Lads, who, if presented with a pleasant cycle route to get from one hospital they work at to another they also work at, might decide to pootle on a bike.

It's going to take quite a while to find a decent route - currently many of the streets that seem sensible are ruled out through being one-way. Surprisingly, as this sign in Royal Street states, facilities for cyclists were to be improved around St Thomas' Hospital and Lambeth North in 2003. Given they're pretty grim now they must have been stunningly awful before. Or maybe the sign went up but the work didn't happen?

Either way, a small step towards making North Lambeth 'more pleasant' would be the removal of this knackered and time-served sign.
Posted by Charlie Holland at 20:02