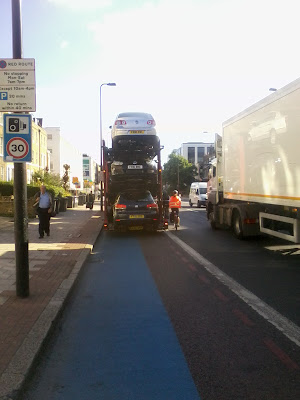 The "Executive Correspondence and Escalation Manager" (I kid you not) of Volkswagen UK has replied to my email asking why their delivery company, Paragon, were delivering some shiny new VWs on two transporters on Cycling Superhighway 7 (in a bus lane on a red route) opposite the garage at 73-75 Clapham Road, Lambeth at 08.30am on Wed 28 July 2010. This was in clear contravention of the road signage - which, as the photos I provided show, permits parking only between 10am and 4pm.

Further to my previous email dated 2 August, I have now received a detailed response from Stephen Hucklesby, Managing Director at Paragon Fleet Solutions.

Stephen acknowledges that the location where you saw their transporters parked is notoriously difficult to deliver to. Europcar and Hertz have branches on Clapham Road, Kennington, and Paragon have been advised by the authorities (police)that deliveries for these branches were to be delivered to the loading/unloading box, which is where their transporter was parked.

He refers to your photo 1 which shows a staggered red line, within the white line (bus route). This signals the loading/unloading area supported by your photo 2, which shows the start of the unloading bay. The transporter is parked exactly where Paragon have been instructed to park.

Paragon, like Volkswagen, take their responsibilities very seriously in this regard and always aim to ensure they satisfy all parties when delivering and collecting in these challenging areas.

At this location, Paragon continue to work with the local authority and police to ensure a safe and compliant environment for the public and other road users.

I am aware that the Superhighway is a new concept that has recently launched in London and that the Transport for London website does state that due to congestion, vehicles may be found in the lane and cyclists should take care in such cases.

Either way, Paragon is acting within police guidelines.

I hope this information answers your questions.

So, that's clear then. If you're delivering a major contributor to congestion you can park on a Cycle Superhighway during its key hours of operation, while cyclists should take care as due to congestion vehicles may be found in their lane.
Posted by Charlie Holland at 08:35