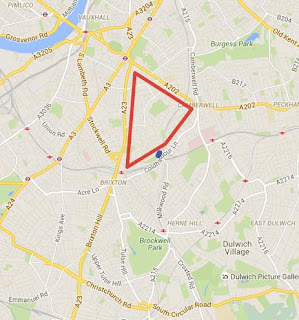 Within a triangle of A roads, in red above, Lambeth Council are undertaking a (potentially) six month trial of one big road filter - the blue blob above - supported by a few smaller ones. The main motor traffic restriction is at the base of Loughborough Road, a B road that bisects the red triangle of A roads. It is an appealing through-route for those coming north from the South Circular Road, via Croxted Road and Milkwood Road, and continuing north towards central London. 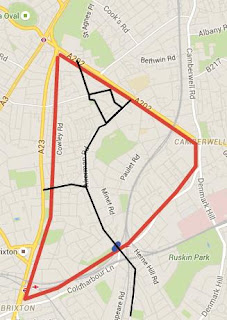 I want to emphasise that I am writing this as, relatively speaking, an outsider to this area, though I have cycled through every street in the area on several occasions in recent years. I very seldom cycle through mainly because I travel less in that direction than others, but also because there there isn't a convenient and intuitive route through here that is useful for me, not least due to the Patmos Road / Vassall Road / Langton Road one-way system (the black square above).

Additionally, until recently Loughborough Road was marred by having a painted cycle lane in the door zone of parked cars, which encouraged close passes and had the risk of dooring. When the road was resurfaced a couple of years ago the borough's Cycle Programme Manager took the opportunity to have the paint put back in a better place (tremendous cost efficiency!) and remove the centre line, which made the road more pleasant to cycle along. 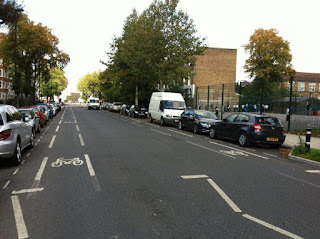 I don't know how many of the primary age children at the playground in the photo above cycle along this road. Even though there is some traffic calming (humps and build outs), the width and straightness of this road means some motorists race along it, and there is often quite a lot of motor traffic passing through this area en-route to somewhere else. 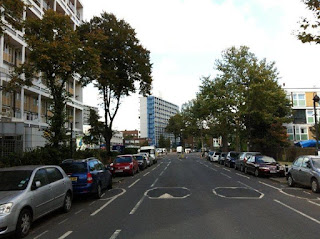 The local Loughborough Junction Action Group worked up a plan to improve the area with Lambeth Council assisted by Lambeth based architectural practice DSDHA. 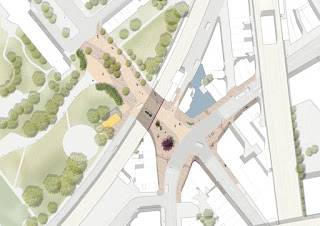 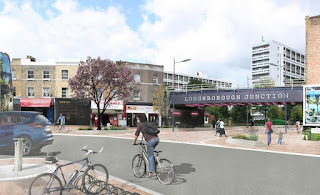 Following an area-wide consultation exercise PDF, public meetings, and a scrutiny review meeting by Councillors of the Cabinet member's decision, the Council is undertaking a six month trial restricting motor traffic access into and out of Coldharbour Lane, with the exception of buses, emergency vehicles and cyclists. An interim review was required after three months, now to be after eight weeks.

There is no doubt that this is a bold trial by Lambeth Council, given that Loughborough Road was/is a B road (CORRECTION - it turns out it isn't a B road, just a local street). The question, as I see it, is whether motorists from the south should continue to be able to cut through the triangle or should they be required to use the A roads?

A significant consideration should be the development of a lot of new housing (the Oval Quarter) to the north of the triangle. This is designated as low car ownership (as is the area in general), and has excellent public transport and walking and cycling potential. How much traffic should pass through here rather than on the A roads? 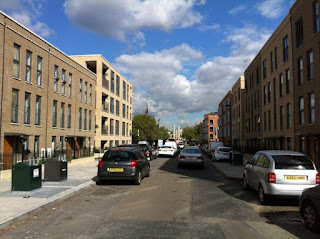 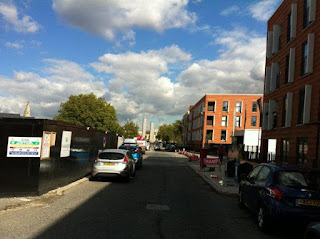 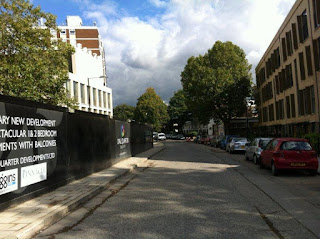 The traffic that historically has passed through the triangle now needs to find another route or another mode of travel. 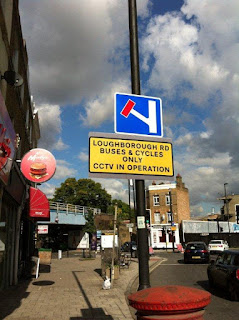 In the first weeks it is clear that motorists used to coming up Milkwood Road will switch to Coldharbour Lane and increase the traffic on this A road, likely to increase congestion on a road that, like much of this area, has plenty of traffic already.

Over time motorists will decide whether this congestion is the best option for them or whether
a) to divert earlier, to Herne Hill / Denmark Hill to the east, or Tulse Hill / Effra Road / A23 to the west.
b) to switch to another mode of travel. 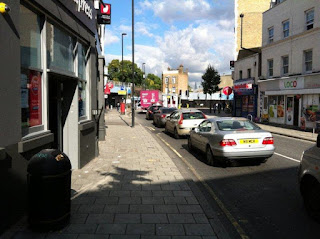 Local motorists also have decisions to make. While through traffic (and associated noise, pollution and risk) in the triangle will be reduced, residents have fewer options of routes to drive than previously (though everywhere remains accessible by car). This, as made clear by the Council during the consultation process, will increase some motor journey times. In particular Coldharbour Lane, pictured above, is likely to have more traffic, certainly in the short term.

Some may be able to, and choose to, alter some of their journey habits - for example, walking or cycling instead for short trips, which most car trips are, or altering their routes (for example, the emergency services may use the area inside the triangle over currently congested A roads, as they are allowed to). Given the continuing population growth (and potential congestion ensuing) and the health benefits of active travel, this is sensibly a desired change sought by the Council, It's a bit carrot and stick, but that tends to be the nature of change.

Public transport - buses in particular - are another important factor though, an essential aid to active travel (walk to the bus stop, take the bus with others, walk to your final destination). The Council need to be monitoring any bus delays and find ways to alleviate them.

A recent public meeting, social media and direct action has made it clear that a number of people resent the measures being trialed. 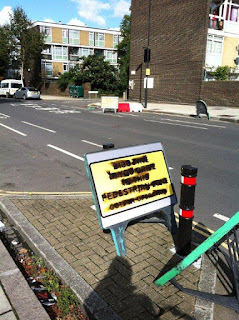 This doesn't necessarily mean the trial is wrong. The concerns people raise must be checked for validity. Tweaks may need to be made. There may have been some aspects that weren't as well promoted as would ideally be. It may be that residents are happy with the volume of motor traffic (increasing as London's population increases) and want no change, or they may work with the Council to find a better way of reducing traffic here.

What I like about this scheme, warts and all, is that it is a real, rather than a token effort by the Council, and that they worked with a local community organisation to improve things, and I applaud them for that. We expect our politicians to be mindful of the bigger picture, and this includes the need to substantially change travel habits in response to population growth, climate change, and public health needs. 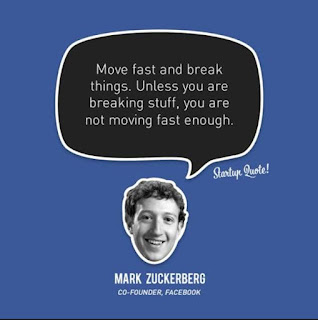 I hope that the Council makes a balanced, considered decision on the back of a sufficiently long trial. If people don't think the current scheme is working then I very much hope they will propose alternative ways to reduce motor traffic in the area, because, like it or not, the status quo cannot be an option going forward.

If you live in, or travel through, the area please email your support or suggestions for improvement to the head of Lambeth's transport team, rmistry@lambeth.gov.uk

--------------
As I write this another blogger has just written about public consultations. His post is well worth a read

Posted by Charlie Holland at 22:51