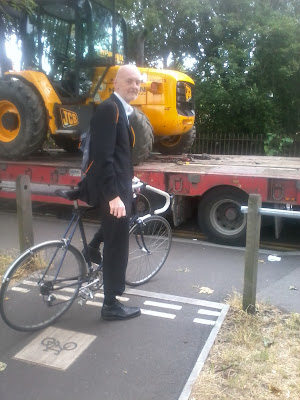 Councillor Hasleden was avoidably detained on his way to the launch of Cycling Superhighway 7 on Clapham Common having opted to take the mellow London Cycle Network 3 across the common rather than fiddlearse around with the blue stuff on the road.

His journey was truncated when he was stopped in his tracks by a large lorry parked slapbang across LCN+3 on Windmill Drive just as he neared the Superhighway launch marquee full of people celebrating London's improvement in cycling conditions.

A couple of police on bikes passed by and had a word with the driver whose lorry was parked illegally on double yellow lines. They didn't make him move though - clearly blocking LCN+3, still used by hundreds of cyclists a day despite the nearby blue goo, is not a concern to the Met.
Posted by Charlie Holland at 15:50