In December I wrote positively about Southwark's revised plans for Heygate Street. The cycle lane going away from the Walworth Road was not only to be retained, but was to be widened to 1.5m. This could be achieved by narrowing the bus lane on the other side of the road to the minimum allowed.

In fact the proposals could have been based on proposals I made in my previous blogpost on the subject, where I pointed out that the narrow cycle lane in the bus lane going towards the Walworth Road was not only too narrow to be usable but also essentially redundant given the bus lane.

I checked with Southwark's Public Realm engineer, Clement Agyei-Frempong, who wrote to me confirming, "We intend to remove the cycle lane in the bus lane."

The work appears now to be complete. There is now a ground level pavement in preparation for the demolition of the at-height walk-ways. There is a cycle lane running away from the Walworth Road and it's pretty wide (though I haven't checked it's fully 1.5m). 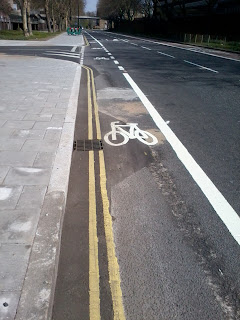 The bus lane running the other way has been narrowed with the white edge line now inside the coloured tarmac, but look what's back in exactly the same place as before: a too narrow cycle lane! 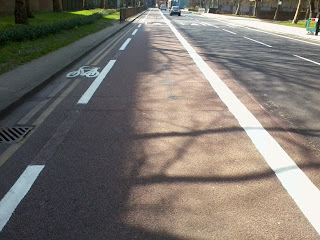 The reality is that a double-decker just fits between the edge of the narrow cycle lane and the edge of the newly narrowed bus lane. Trust me, you wouldn't want it to pass that close to you while you're riding your bike on the yellow lines. 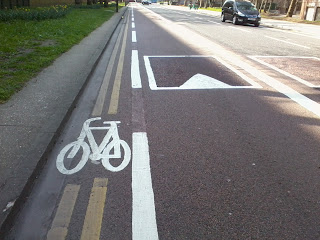 I really hope that this is a contractor's cock-up rather than a Southwark Council approved cycle lane, If it's the latter then there can be no doubt that the people involved in that decision making really don't understand what planning for cyclists is about.

UPDATE
I was delighted to receive a reply to my query from Mr Agyei-Frempong yesterday (10 April) saying
"I will urgently instruct the contractor to burn of the cycle lane within the bus lane. This was an omission by the contractor."
and even more delighted to hear that the paint is being burnt off today.
Posted by Charlie Holland at 20:53

That's bloody ridiculous! I'd personally be riding on the outside of that cycle lane anyway, I tend to go 2-3' from the kerb to allow for a safety buffer.

Riding in that lane doesn't allow any room for error and is encouraging very poor roadcraft.

May have to do with the positioning of the speed humps also. Southwark are not very cycle friendly with how they've implemented them here - reminds me of Southwark's bit of Gipsy Hill where the speed hump design & position gives you a choice of 'ride right in the door zone' or 'play chicken with oncoming traffic'.