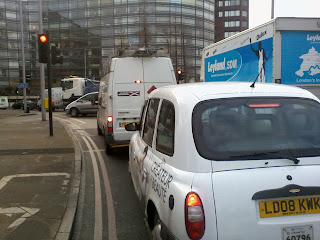 Lack of funding is threatening the Jubilee Greenway, a 60km walking and cycling route connecting all nine of London’s 2012 Olympic and Paralympic Games venues with many of the capital’s finest attractions, parks and historic landmarks.

At its launch, Boris Johnson said, "Few capitals of the world can boast such a superb asset for walkers and cyclists".

But the Chief Executive of Walk England, Jim Walker, has replied to my concerns about the route in Lambeth saying,
"We have marked a cyclable path for information on the map/text on our site but don't actively promote the cycling potential of the path because - as you say, on advice from several competent cyclists sadly there are limitations to the quality of the current experience in several places.

Sadly we don't have funding for improving the cycling offer either so we have some challenges."

Within Lambeth the cycling 'Greenway' (which is currently unsigned, unlike the walking part) is mainly on busy A roads that many families fear cycling on. It comes behind the Southbank Centre to York Road, swinging onto Westminster Bridge roundabout, then takes Lambeth Palace Road, before approaching the roundabout (above) onto Lambeth Bridge.

An obvious, and cheap, solution (with decent views) would be to combine the cycling and walking routes along the wide Thames Path except that, contentiously and contrary to Transport for London's opinion, local politicians recently arranged for 'No Cycling' signs to be installed on the Jubilee Greenway section (below on Saturday 16 Jan at 1pm) despite it having been a shared space for years and there being no Traffic Management Order banning cycling. Campaigners from Lambeth Cyclists and the local Living Streets groups would prefer to see signage emphasising pedestrian priority and considerate cycling, with enforcement activity focussed on reckless cyclists. 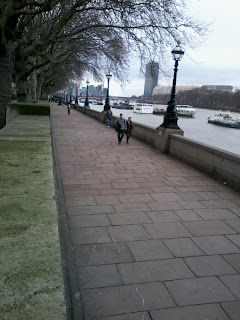 An alternative scenic option, sensible for the future development along the South Bank, would be to develop Guy's and St Thomas' service road (below) as a cycle path, running parallel to the Thames Path, linking Lambeth Bridge to Belvedere Road: 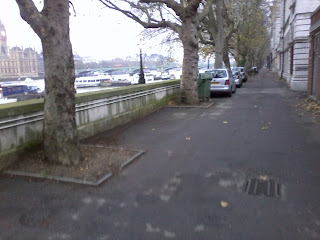 Fortunately our MP, Kate Hoey, is the Mayor of London's Commissioner for Sport, and should have the clout to get the necessary funding for the cycling part of the Greenway to be up to the standard of the walking part ready for the Olympics and as a legacy beyond.

She shouldn't face an uphill task. After all,
"The Jubilee Greenway is being supported by a partnership including senior representatives from central government, The Mayor’s office, Royal Parks, The Olympic Delivery Authority, Transport for London, British Waterways, Thames Water and all the relevant local authorities."

You may wish to write to Kate Hoey with your views on the best solution(s) at hoeyk@parliament.uk .
Posted by Charlie Holland at 13:12