(See bottom of page for update - well done to the local residents who voiced their concerns in the consultation meeting; as soon as I know of a date for the second meeting I'll publicise it)

Yesterday I went to a meeting for locals to feedback on ideas relating to the construction schedule and methods for the replacement E&C Leisure Centre (ahem, and accompanying new 36 storey tower block with 280 flats).

Unbelievably the developers, Balfour Beatty and Lend Lease, didn't show the demolition and construction lorries entering the site from the adjacent E&C gyratory, where you'd expect lorries to be, but instead showed them using quiet residential streets and, I kid you not, Cycle Superhighway 7 (Brook Road and Churchyard Row) to access the site. That's right, lorries on the bit of CS7 intended to allow cyclists to bypass the heavy traffic on the gyratory. They envisage the cycle bypass being used for major construction vehicles on the mega building project. For four long years.

As you'd expect the locals living in these back streets, on which primary school kids are just starting to cycle around after school and during the holidays, couldn't believe their eyes and ears. An emerging culture of adults and children sharing the road is about to be bludgeoned by thousands of tipper truck movements.

The developers told us they're meeting TfL this week to discuss ideas (which may have been additional rather than alternative) for a layby off the gyratory for lorries to unload, but didn't seem at all sure that TfL would think this acceptable for some reason (let's guess, keeping the motor traffic flowing?).

I am told that today, during Mayor's Question Time,  BJ again reiterated his belief that the E&C gyratory is fine to cycle around if you keep your wits about you.

He may turn out to be absolutely right. After all, if all the heavy traffic is on the Cycle Superhighway E&C  Bypass, the gyratory can be made freely available for all cyclists, including the primary school kids from the formerly quiet back streets.

I have now had an email from the consultation managers to let me know that the developers,


"have now met with TfL and it was a very positive meeting. They discussed the residents' concerns, many of  which are shared by TfL and the project team. The team is now working  hard with TfL to find a much improved solution and are hoping to have an alternate access proposal next week.
We are of course aware that people will want to express their  reactions to Tuesday's meeting, but would like it made known that the  concerns are being taking extremely seriously.
We are in the process of scheduling a follow up meeting with residents in a couple of weeks time to review the alternative proposal and will be in touch shortly with further details."

Posted by Charlie Holland at 23:14

Are adults mature enough to share roads with children?

By now everyone surely understands the multitude of health, environmental and personal development reasons  for children to walk or cycle to school, to their after-schools activities, to their friends' houses, or just for the pure fun of doing so.

So why do so few children cycle around their neighbourhood and why are parents so reluctant to permit them to do so?

I think the answer is quite simple. We have created an adults-only culture on our streets.

The expectation is that people using streets have obtained a driving licence to use them, and that other road users should not interfere with the 'urgent', 'important', grown-up traffic. They should cross at designated points and have a professional bus driver to take them from A to B.

The driving culture of lessons, licence and penalties is clearly not really orientated on controlling your fast, heavy vehicle to stop it intimidating and damaging children who are bumbling along the roads in an unpredictable manner (because children are immature, unpredictable and prone to being distracted, otherwise we wouldn't call them children).

Instead, our culture has made the driving licence the base-level for road usage - with all other users required to have the level of understanding of road signs, rules and mechanical control that the licence holder has. The Highway Code is essential reading for everyone, says the Goverment, even if you can't yet read!

If you don't show the motorists' understanding of road rules they will simply bully you off the road.

So, in our culture, what happens when a child is using their road (as much their road as an adults) and a driver smashes into them at over twice the legal speed limit, behaving in a totally 'important adult' get-out-of-my-way way? This week's report from 'This is Somerset' tells you all you need to know:

Talented footballer Callum Hartigan, 11, was left with broken bones in his right leg and needed skin and tissue grafts from his back and left thigh after he was struck by Daniel Wooler, a company director who was driving at 67mph in a 30mph zone in Bristol, as he rushed to attend a meeting he was late for.

Bristol Crown Court heard Wooler was racked with remorse after driving his BMW 7-Series at more than twice the speed limit and hitting Callum as he rode his bike in Bradley Stoke Way.
Wooler, 44, of Stanton Drew, pleaded guilty to dangerous driving in February last year.

Judge Simon Darwall-Smith gave him a 12-month jail term, suspended for two years, with 150 hours of unpaid work and £850 court costs. He banned him from driving for a year and ordered him to pass an extended driving test before returning to the road.

The judge told Wooler: "You were driving in excess of 60mph in a 30mph area. This speed had a disastrous effect on Callum. He was injured seriously and will have ongoing further surgery.

"I accept that you are fully remorseful about the speed of your driving and the consequences of it.

"This was not a case where any injury was intended by you."

There is absolutely no prospect of masses of children cycling in their neighbourhood until such an appallingly 'adult' use of the road is considered by our culture and our judiciary to be the exact equivalent of callously hitting a pensioner over the head with an iron bar, and punished accordingly.

The website for the ticketed Thames Diamond Jubilee Festival big event in Battersea Park is quite clear:

GETTING THERE
Nearest Stations: Clapham Junction, Fulham Broadway and Victoria

PARKING
General Parking is not available at Battersea Park. Travel on Public Transport is strongly recommended.
There will not be designated parking for coaches or other methods of private transport.

I'd have thought it would have made sense to encourage people to cycle to the event and to provide a load of cycle stands.

Of course there's a chance that the organisers didn't give a moment's thought about cycling being a means of private transport.

Posted by Charlie Holland at 19:13

Here are two views from the same position in Darwin Street, SE17 (a stones throw from the Bricklayers Arms Flyover). 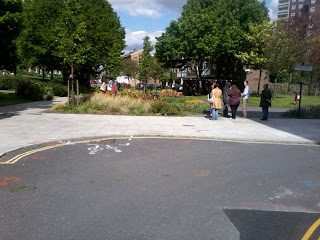 Here's a bit of a closer view of the planting 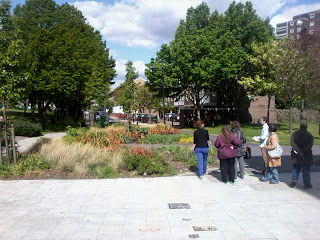 The next road along, Mason Street, used to look like this:

and now looks like this, attractive and usable for cyclists and pedestrians, while the motorist has to take the long way round.: 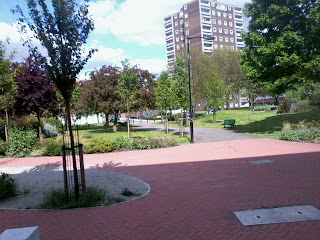 This should be food for thought for Lambeth's Neighbourhood Enhancement Programme and the residents within the Clapham Road, South Lambeth Road and Harleyford Road triangle that has funding for enhancement..
Posted by Charlie Holland at 18:02 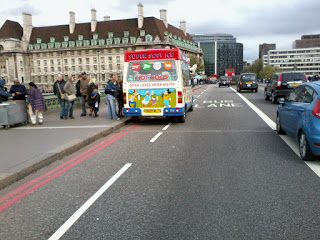 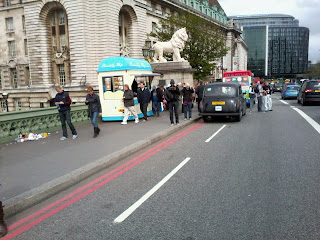 I wonder if TfL could arrange for one of Boris's new Routemaster replacements to undergo a crash test here?
Posted by Charlie Holland at 18:42 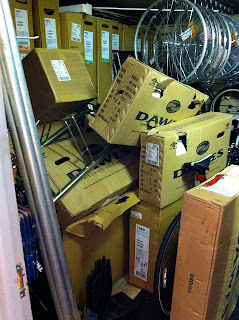 There'll be a number of people selling off bits and pieces outside Balfe's Bikes at 338 Kennington Road, SE11 4LD from 10am to 2pm so do drop by if you're in the area. Some details of what's on offer, which also includes some items from Balfe's somewhat jumbled stockroom, can be found at  http://www.lfgss.com/thread84326.html
Posted by Charlie Holland at 17:56