How to damage your local parade of shops


Lord Stern, author of the government-commissioned review on climate change that became the reference work for politicians and green campaigners, now says he underestimated the risks, and should have been more "blunt" about the threat posed to the economy by rising temperatures

He said some countries, including China, had now started to grasp the seriousness of the risks, but governments should now act forcefully to shift their economies towards less energy-intensive, more environmentally sustainable technologies.

Clearly there's big stuff that needs to happen, such as changing from coal-fired power stations to solar and wind power, but there are also tried and tested ways of reducing carbon emissions, such as nurturing cycling over car usage and encouraging local shopping.

Lambeth has, compared with some other boroughs, been working to increase the numbers cycling for a number of years now for the usual good reasons of reducing congestion, increasing local, low-cost mobility, cutting CO2 and pollution, and reducing road danger.

So it's really surprising that there are still whole parades of shops in Lambeth that don't have any cycle parking at all. I wrote in 2010 on the lack of cycle parking on Kennington Road and there's still no cycle parking along there.

Down on Kennington Park Road opposite Kennington Park there's a parade of shops on Cycle Superhighway 7, passed by thousands of cyclists every day who don't stop because there's nowhere to park their bike while they nip into a shop 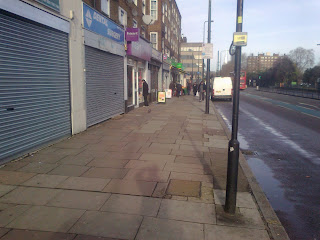 All the street furniture that exists is too wide to get a D-Lock, the type most cyclists use, around. The consequence is that the local economy is missing out on customers which means local residents are therefore missing out on jobs. If a retailer isn't getting enough people through the door they cut back on their stock, making the shop less appealing and ultimately it goes out of business. This impacts in turn on locals who have to travel further to do their shopping.

A little further afield, here's a quick night-time phone snap of the Elm Park Parade that I took the other night on a visit to the Elm Park Tavern. There isn't a Sheffield Stand for the whole parade including the pub. The option is to lock your bike to a signpost, if you can find one that's not already being used, knowing your bike isn't as secure as it would be with proper cycle parking. 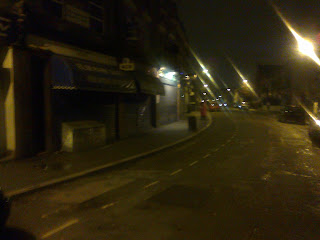 There's a subliminal message here too - we don't welcome people who ride bikes to our parade. But look at all that inviting car parking space.

It really shocks me that there can be whole parades of shops without a single cycle parking stand in a borough that prides itself on getting cycling.

Posted by Charlie Holland at 18:03

How Councils encourage people to drive to the shops

Lambeth council has announced that shoppers looking for last-minute Christmas presents are being offered free parking in Lambeth on 21 and 22 December if they use the PayByPhone service.  Free parking will apply to all pay and display and shared use pay and display bays (not including suspended bays) for motorists registered with the scheme.

Peckham car parks will be free to all visitors from this weekend until New Year’s Eve, and weekend parking is now free in the council’s car park near East Street.The move comes as Southwark council pledges to offer support to local businesses, and is urging residents to shop local this Christmas.

To help people get into the festive spirit Hillingdon Council is also offering free parking to residents in its car parks and on-street bays on Saturdays and Sundays in December.

Father Christmas will be even merrier on Christmas Eve as he won’t need to pay for parking his sleigh as he picks up the final presents for the borough’s girls and boys.
Hounslow Council are giving Santa and his helpers the chance to finish their festive shopping for free at all of the borough’s car parks and on street parking bays on 24 December.


Free parking arrives in Merton for Christmas Merton Council is giving a boost to both shoppers and shopkeepers this Christmas by providing free parking. Parking will be free in every council-owned car park throughout the borough for each weekend from the 1 December, leading up to Christmas Day, including Christmas Eve, which falls on a Monday.

Haringey Council has announced free parking for three days before Christmas.
On Saturday 22 December and on Christmas Eve, Monday 24 December, free parking will be available for shoppers in all car parks and in dedicated pay and display parking areas.
With Sunday parking already free this means that parking will cost nothing for the whole Christmas weekend in Harringay and other shopping areas in the borough.

Free bus journeys would benefit the majority of central London households which don't even own a car to take to the shopping centre, as well as reducing congestion on the roads and the associated pollution, injuries and noise And, given there are many more people without cars than with them, what a boost that offers retailers!

Posted by Charlie Holland at 21:39