Coffee, soft drink and a newspaper? 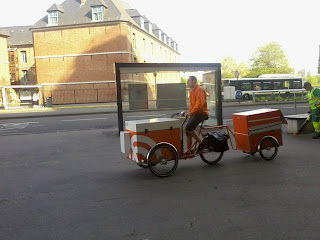 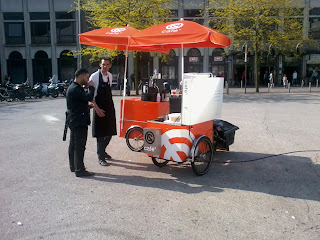 and saw him a few minutes later set up and trading 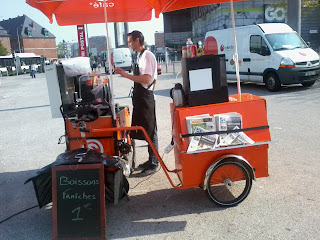 Soft drinks, newspapers and freshly brewed coffee were on offer. The coffee machine is winched up from the base of the trailer, you can just see the winding mechanism on the lower left of the trailer. 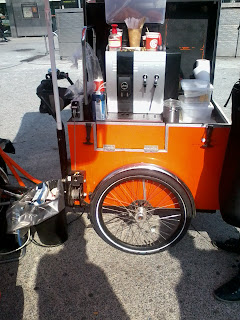 Posted by Charlie Holland at 14:14

Lille racing ahead of Westminster 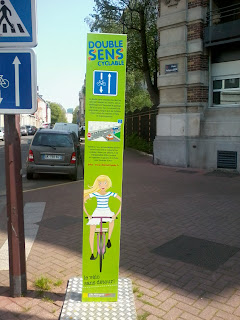 Like Westminster the centre of Lille is chock full of one-way streets but, unlike Westminster, there's clearly a major push to introduce contra-flows for cyclists, facilitating their movement, as the sign above shows. In addition much of Lille's centre has motor-vehicle bans. The result is many people walking and cycling (with no hi-vis or helmets to be seen). 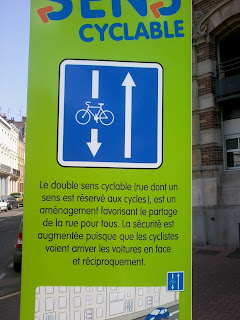 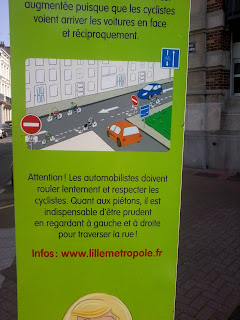 While there doesn't appear to be a B-Bike scheme, you can hire Segways and Electric Bikes at the rail station. 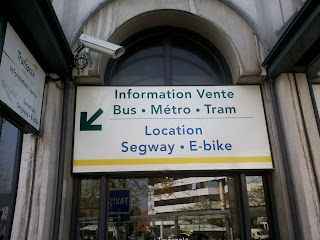 Posted by Charlie Holland at 14:07 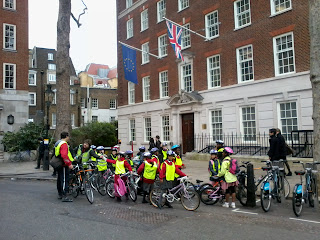 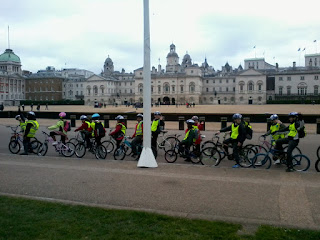 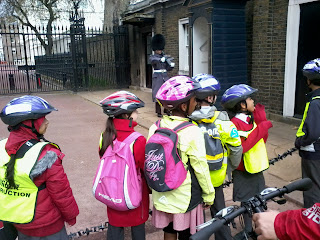 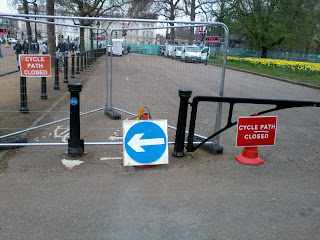 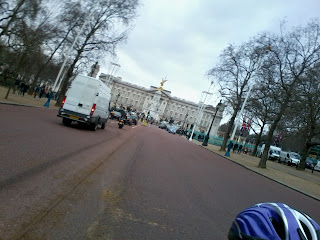 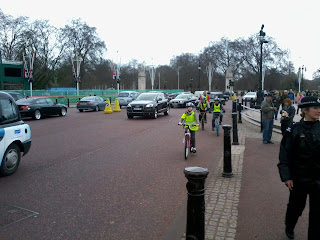 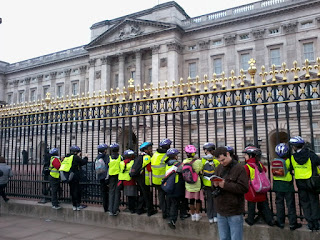 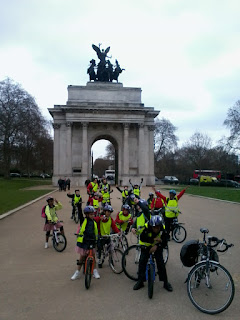 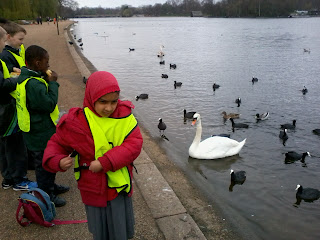 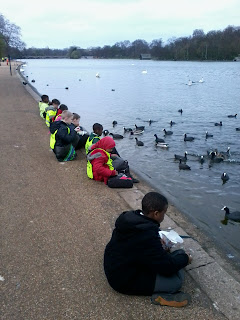 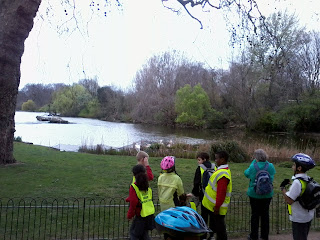 We could take our time to see the sights and were able to stop where we chose. Visiting central London by bicycle beats the coach, bus or underground hands down!
Posted by Charlie Holland at 12:40 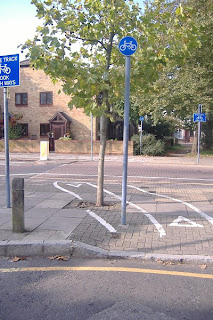 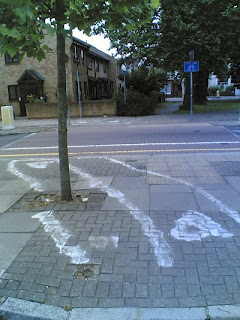 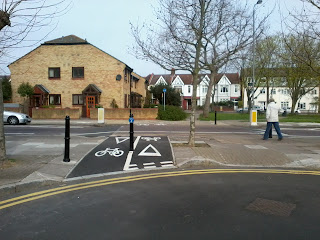 While I'd love to amend the title to "Doin' away with the Vauxhall Gyratory", the plans for Cycling Superficial Highway 5 show TfL have no intention to reduce motor traffic use here.

The Cyclists in the City blog is giving the plans for Cycling Superficialhighway 5 a thorough going over - well worth a read.
http://cyclelondoncity.blogspot.com/2011/04/tfl-designs-new-cycle-superhighway-at.html
http://cyclelondoncity.blogspot.com/2011/04/cycle-superhighway-is-scandalous-carbon.html
and more to come this weekend.

Feedback on the plans can be sent to:
Richard Shirley
Senior Communications & Consultation Manager
Cycle Superhighways
Transport for London
richard.shirley@tfl.gov.uk
Posted by Charlie Holland at 19:34

Following on from my last post, there isn't an email address for Tesco Kennington on Tesco's website so I filled in Tesco Customer Services' online form. Below is the email I received in response requiring me to make contact again, whereas they could have simply forwarded my complaint internally. Now, I wonder where I put those old-fangled envelopes?

I am very sorry to hear that a Tesco lorry was obstructing a cycle lane.


For us to look into this issue and address the matter with the driver concerned, please could I ask you to give our Well Drive line a call on 0800 22 55 33.

Thank you for taking the time to contact me regarding this issue.
Posted by Charlie Holland at 19:14

Why I bypass shopping at Tesco Kennington 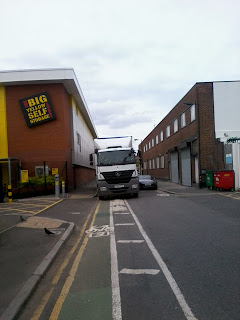 Today, on my way back from shopping at a rival to Tesco that I prefer to frequent I was forced to a halt because of a Tesco lorry parked on a double yellow line totally obstructing the cycle track in Vauxhall Street. This is one reason I shop elsewhere.

The driver could have found a sensible place to park and Tesco could have called his mobile when the store was ready to receive his load.

Instead Tesco are happy to place cyclists' lives at risk - this is after all part of London Cycle Network Route 3 - a backstreet route intended to be appealing and safe for inexperienced cyclists such as children. Needless to say this is not a one-off incidence but a frequent occurrence at this store.

I'm emailing the store manager to ask why the suggestion I make above is not already in place, and to ensure that it or a similar equivalent will be put in place and the situation never arise again. I'll publish his/her reply. 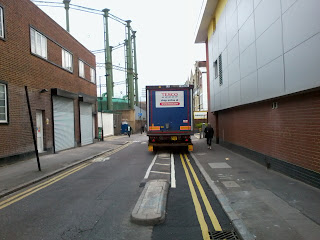 Posted by Charlie Holland at 16:22 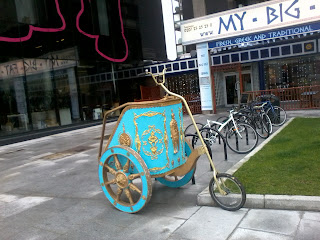 Bike Polo is a popular free pastime in the Elephant and Castle area, played on the court at the corner of Harper Road and Bath Terrace. But with the Olympics looming it may be passe; chariot bike racing is looking like it's the coming craze if this example seen a couple of days at the E&C is anything to go by. 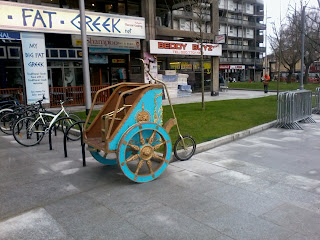 The above is, of course, all true. For dodgier news articles I refer you to the various posts made on this date at http://crapwalthamforest.blogspot.com/ and to
http://www.london-se1.co.uk/news/view/5196
Posted by Charlie Holland at 09:59