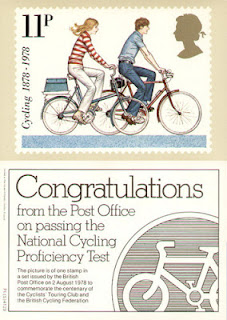 This is how cyclists were represented in 1950 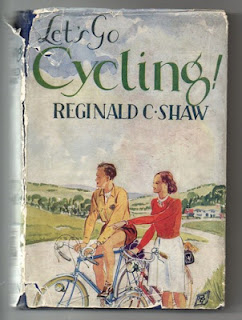 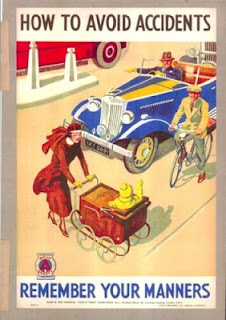 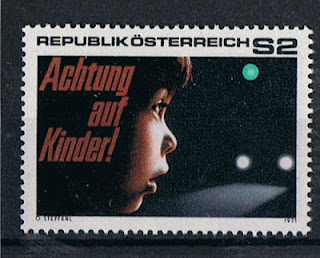 and this iss the image our Department for Transport recently used in a publication
showing how they think people should dress to be safe cycling on the roads today. Oh dear. 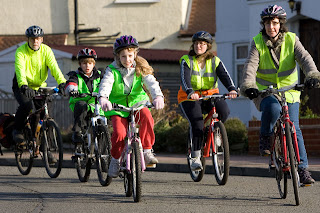 Posted by Charlie Holland at 07:35

I was horrified to read one of the reasons that both the British Film Institute and Southbank Centre have cited in their objections to a planning application (no 13/01797/FUL) being made for a further Barclays Hire Docking Station under Waterloo Bridge.

While both organisations state they are happy having bikes in the area, the BFI states,


6. There are already local stakeholder concerns about the increase in vehicle traffic by the major developments along Belvedere Road / Upper Ground over the next 5 years and that the TfL desire to increase docking stations on "quiet" roads is not suitable for this location as it will become very busy with construction traffic which poses a higher risk to cyclists.

and the Southbank Centre states,


10. Finally the general issue of locations of future docking stations/ expansions should be looked at firstly through the Spine route project for this area. Belvedere road will be a main construction road for the next few years so the rational that they want to increase availability in "quiet" streets really does not apply.

This is Sustrans National Cycle Network Route 4 that we're talking about. It should be a fantastic route running alongside the river away from the pedestrian throng of the river frontage. There are major A roads with no or dire cycle facilities the next road back (York Road / Stamford Street) so it's the only sensible option.

It surely cannot be accepted that, at a time when the importance of active travel is so clear and the support for cycling so strong within the council, this National Cycle Network route can be treated in such a cavalier way.

I hope there's a sensible plan to allow safe cycling for 8-80 year olds in the South Bank area and that the means of construction works within these parameters. The Dutch can do it, so I'm sure we can too.

Watch this space.
Posted by Charlie Holland at 22:11

Please pop an e-postcard to Lambeth

Lambeth is asking people to fill out this e-postcard to help them spend substantial amounts of money by next Spring to improve our streets. It's very quick and easy to do. 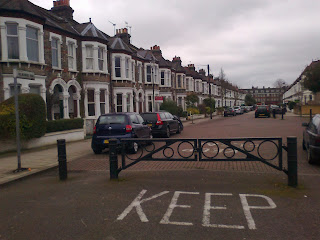 Suggest filtered road closure so that residential traffic and visitors can access their homes/businesses but other drivers cannot use your street as a cut through to another area. Pedestrians and cyclists will continue to be able to make their way through.

Good examples of this in SE11 include
i, The filtered closure at the Kennington Park Road end of Cleaver Square
ii. the filtered closure at the top end of Sullivan Road at the junction with Brook Drive, making the enclave of streets around Walcot Square and St Mary's Gardens tranquil and pleasant with little traffic and low speeds, while allowing children, for example, to cycle through the barrier to the local primary thus avoiding having to use an A road.

Speed of Traffic
Ask for 20mph speed limit. Several boroughs are setting 20mph, rather than 30mph, as the default speed limit, raised only on certain streets where it is deemed reasonable. Lambeth hasn't moved to that yet, so the more people who ask for their streets to become 20mph streets the better.

If you live on a major road you can ask for cycle lanes to be put in, allowing children to make their way around by bike (tweaked photo of Baylis Road from this fab blog) 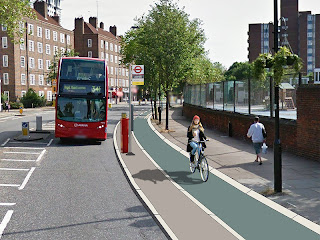 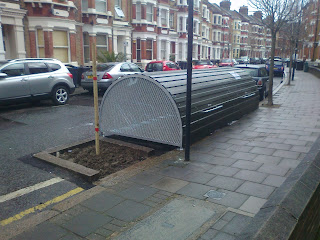 Fed up with visitors having to drag their bikes into your hall, or having to keep your own bike indoors? Is it easier to park a car than a bicycle? Ask for cycle stands or residential cycle parking to be installed. You should emphasise if there's nowhere you can even informally park your bike: 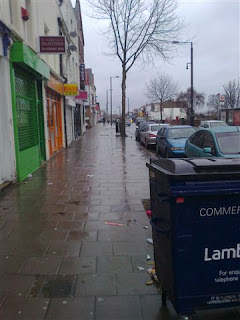 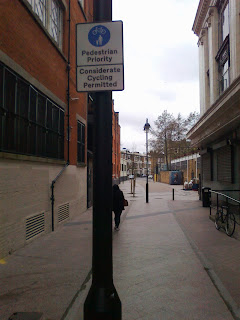 Ask for it to become shared use, with signage emphasising pedestrian priority, but considerate cycling permitted. Also ask for a dropped kerb to be installed, such as the new one in Wincott Street: 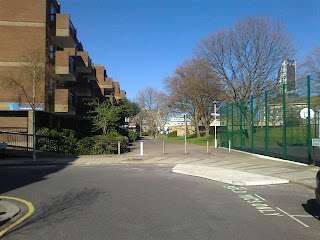 Barriers that are inconvenient and futile 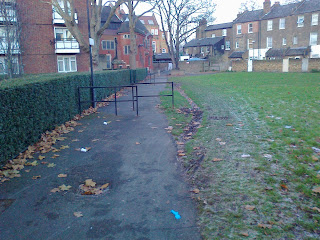 Ask for these to be removed with Pedestrian Priority signs in their place and, if needed, rumble strips that deter cyclists from maintaining too high a speed.

Banned entry or turns for cyclists 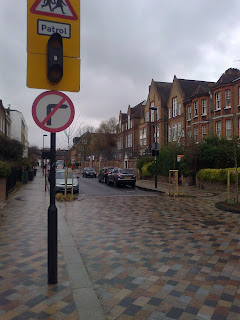 Lambeth is making many streets two-way for cyclists that are one-way for motorists. A simple 'except cycles' sign can be added to banned turns such as that shown above. 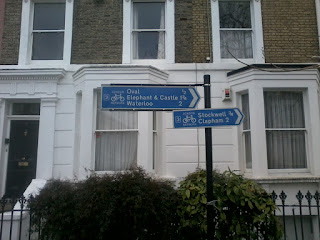 A chance to flag up signs or road markings that need fixing, removing, or are needed. 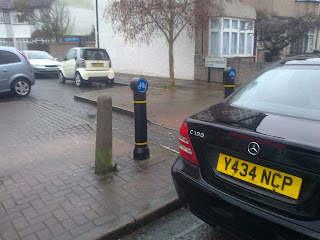 Ask for No Parking and/or No Loading lines and signs

Lack of greenery
The focus of road engineering and design for the past fifty years has been on getting as much motor traffic using them as possible. This is changing and allows our streets to be reclaimed as pleasant spaces while still permitting necessary motor traffic 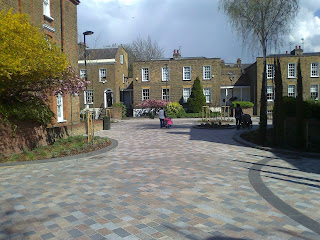 . There's no way the budget will stretch to doing an Isabel Street to Van Gogh Walk transformation for every street but planting trees in existing tree pits or establishing some other form of greenery should be feasible.