There's an important debate and vote on retaining the 20mph limit on Blackfriars Bridge, rather than making the limit 30mph as currently planned by TfL,  in the London Assembly next week, on Friday 8 June 2011, when Assembly members will vote on a formal motion.

Please go the link below now and sign the petition. The page gives the background
http://new.lcc.org.uk/articles/show-your-support-for-the-london-assemblys-motion-to-retain-20mph-on-blackfriars


The bridges are key to making London a pleasant place to walk and cycle around.
Posted by Charlie Holland at 20:55

Get a free basic check-up for your bicycle courtesy of Lambeth's sustainable travel team this Wed 1 June between 5.30 and 7.30pm. The event is held in the piazza outside the King's College's James Clerk Maxwell building next to BFI IMAX by Stamford Street .


There will also be an HGV awareness session so you can see the view from the driver's cab and the Metropolitan Police Cycle Taskforce will be security marking bikes for free if you haven't already had it done.
Posted by Charlie Holland at 15:19 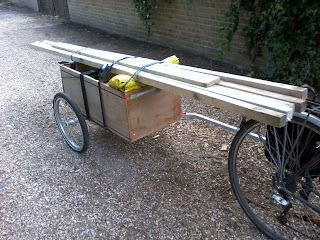 Once or twice a year our housing association has a skip for people to dump stuff they don't want, as do the local allotments. Today I took a load of useful lengths of wood out of the housing skip to be used at the allotments (also taking a neighbour's used grow bags for earthing up the potatoes), 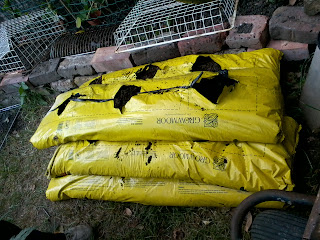 I then took multiple tins of paints out of the skip at the allotments and brought them home to decorate our house with. 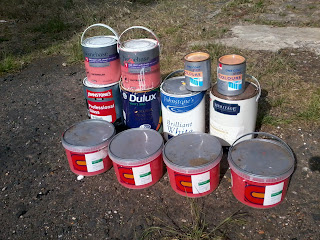 Most of the stuff in the two skips could be reused in the local area as straightforwardly as I did with the wood and the paint (and a splendid TV and an unused laundry basket we now happily own).
At the risk of sounding churlish given the quality of the stuff we've taken from these skips, it would be much better if people offered stuff to their neighbours, put it on Freecycle or gave it to a charity shop thus negating the need for a skip or reducing the frequency of their use.
After all, skip lorries are amongst the noisiest and most dangerous vehicles on our streets - never mind the wastefulness and danger involved in making and transporting new products when existing ones can so easily be reused.
Posted by Charlie Holland at 18:48 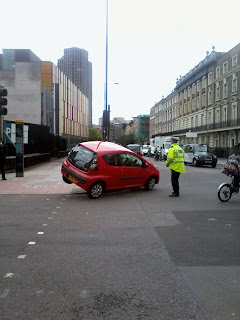 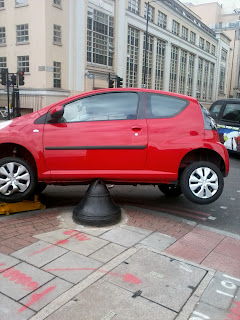 The AA to the rescue 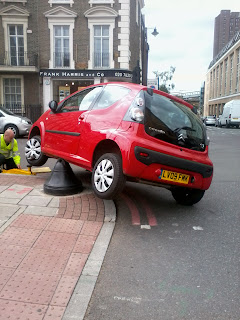 I wonder whether this driver will be required to have a medical check and driving retest?

I saw this today on Cornwall Road (London Cycle Network Route 3) at the junction with Stamford Street. The primary school children I was teaching safe on-road cycling to weren't impressed.

And, for the record, they all considered Upper Ground, where they were to turn right into Cornwall Road, to be a very hostile cycling environment. That'll be one of those Olympic Cycling Greenways / National Cycle Networks - stuffed full of big lorries, big buses and belching taxis.
Posted by Charlie Holland at 16:01 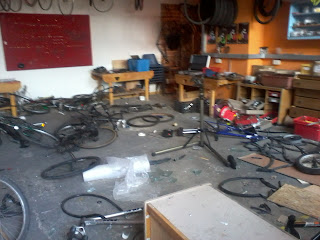 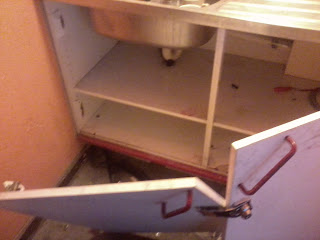 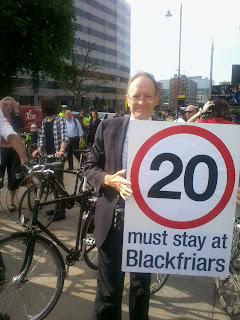 The Blackfriars Bridge Flashride, organised within 24 hours, and highlighting the need for pleasant conditions for cyclists and pedestrians rather than motorways, attracted several hundred cyclists today: 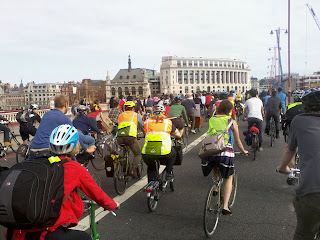 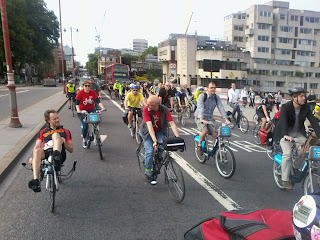 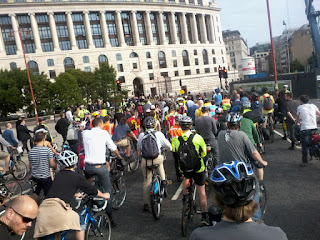 It was nice to see some youngsters on the Bridge for a change: 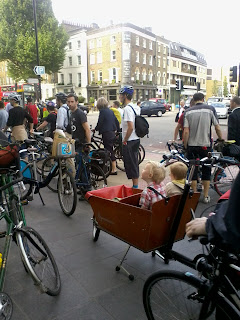 Posted by Charlie Holland at 18:26

This Friday morning (tomorrow!) London Cycling Campaign report there'll be a  Flashride over Blackfriars Bridge - meet at 8.30am by Doggett's Pub on the southside of the bridge.

London's bridges are going to be core to the future of cycling in London. Currently they're dismal to approach and ride across.

Under Boris's regimeTfL are mucking around at the edges rather than dealing wholeheartedly with the motor traffic sick centre of London.

It's time for pedestrians and cyclists alike to reject motorway style urban planning for the Capital's core and force a move towards non-polluting, slow, quiet, clean and healthy travel.

It's time to mobilise! See you tomorrow. First Blackfriars then Waterloo, Westminster, Lambeth and Vauxhall.

Read more about Blackfriars here
Posted by Charlie Holland at 18:27

According to Network Rail, 70% of all rail users either start or finish their journey in London giving an exquisite opportunity to make filthy great profits from flogging bottled water, shiny paperbacks and the like, brought in by the congesting, noisy, stinking, lorryload.

The opportunity to grossly rack up the profits at the cost of the environment is enhanced if you ensure your stations don't have drinking water fountains or taps for refilling your water bottles, charity shops or libraries.

We're committed to reducing our environmental impact throughout the infrastructure that we own and operate.

Our Commitments:
Achieving sustainable consumption and production
Protecting natural resources
Improving energy efficiency and reducing reliance on fossil fuels
Improving the economic value of the existing railway
Encouraging people to use the railways.

Why not ask whether there'll be prominently positioned water taps in the newly refurbished station at the meeting tomorrow night.
Posted by Charlie Holland at 20:11

An interesting report can be found here with the linked PDF well worth a read.


The walkabout was organised to look at the quality of current walking and cycling routes into the Heygate and Elephant & Castle from the surrounding area and to assess the potential for new routes to be created. The focus was principally on the routes south of the E&C Shopping Centre.
Posted by Charlie Holland at 20:35