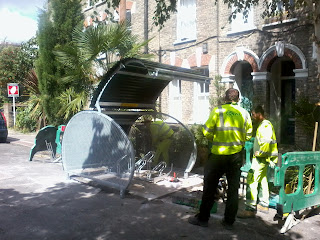 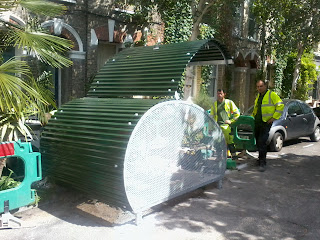 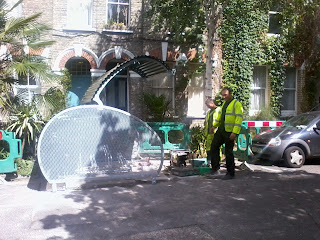 Posted by Charlie Holland at 16:39

94,000,000 litres of bottled water are sold in London each year with a clear knock-on effect on traffic volume and pollution that drinking fountains and taps don't have.

Lambeth Council has two planning/development policies for Waterloo Station and area out for consultation, both ending this Friday 22nd July at 5pm and you might consider dropping the council an email, such as the draft below, asking them to build in a requirement for prominent free drinking water fountains/taps to reduce the dependency on bottled water.


The email, with your name and address at the bottom, should be sent to  MTrevethan@lambeth.gov.uk


Please can the Draft Waterloo Area Supplementary Planning Document and the Waterloo Station and Interchange Draft Development Brief be amended to ensure the prominent and abundant provision of freely available drinking water (fountains or taps) within Waterloo to reduce the traffic, waste, pollution and expense associated with bottled water. It is appalling that Waterloo Station has no public water fountains/taps, given the number of tourists and commuters passing through. Equally the entire South Bank appears to have no working water fountains/taps for public use. Please build in a condition that these taps are not hidden away but are positioned and promoted to the standard that the bottled water manufacturers and retailers achieve.
Posted by Charlie Holland at 11:44

or the Big Society in action? I doubt they'll withstand the rain but at least it's a temporary fix.

Posted by Charlie Holland at 17:50


The radio presenter woke me up this morning with a reminder that Horse Guards Road is shut as of today. The Royal Parks Agency hadn't let me know the results of their attempt to find a way to retain cycling and the road certainly looked shut:
But those who ignore road signs are rewarded here as it turns out that provision has been made by the Royal Parks for cyclists. I'm delighted, firstly, that the Royal Parks have taken on board the logic of facilitating cyclists and, secondly, that they've found a way to do so. I'm sure that in time they'll sort out the approach signage too. You never know, we may even hear radio presenters reporting, "XYZ Road is closed to motor traffic but not cyclists."

Posted by Charlie Holland at 17:38

The draft Transport Local Implementation Plan (LIP) was accepted In June's Lambeth Council Cabinet Meeting and was submitted to Transport for London. The Head of Transportation highlighted that this was a twenty year plan but that it also contained two year projects to design and develop community level plans.


I find the results from the Consultation very encouraging, not least because a lot of people responded.
1600 questionnaires were sent to a sample of properties in each of Lambeth’s 21 wards and a total of 762 were returned. There were also 243 online responses making a total of 1005 responses.

The feedback was as follows:
The response to Lambeth’s Road Danger Reduction policy (by reducing the number and speed of motor vehicles) was positive with 89% expressing support.

The response to Lambeth’s new ‘neighbourhood’ approach (that introduces a range of improvements to public spaces rather than single measures to individual streets) was also positive with 82% supporting the policy. Those who provided comments felt that it would help the council to deliver better value for money and show that the council viewed Lambeth’s streets as community spaces and not just a ‘transit zone.’


In the main there was a high level of support for the TRANSPORT OBJECTIVES in the draft LTP with between 90 and 94% support for all of the goals, as follows:

All of the DELIVERY ACTIONS set out in the draft LTP received majority support with improving public transport, tackling inconsiderate driving and promoting sustainable transport being the most popular.

Four key priorities emerged from the general comments received.
1. Cyclists and those wanting to ride should be made to feel safer through dedicated cycle lanes, giving cyclists priority on the road and better promotion of cycling.

2. The condition of principal and secondary roads should be improved to reduce road danger and to encourage more residents to walk and cycle.

3. Traffic in the borough should be reduced and slowed particularly in residential roads. However, alternative methods of speed management other than physical traffic calming measures should be considered

4. Public transport fares should be reduced to make public transport a viable alternative to motor vehicle travel.
Posted by Charlie Holland at 22:14


The policeman who approached me as I was taking photos told me that he had never seen as many cars at a Royal Garden Party as there were today, which is no doubt why they'd taken over Green Park itself.

Of course giving 8000 guests free car parking in central London slap bang by their destination, where no buses run, is one hell of an inducement for these worthy recipients of the Queen's largesse (National Trust and RSPB members no doubt) to drive rather than take public transport. I wonder what incentives are given to encourage these day trippers to use sustainable transport - free or discounted rail fares? A special shuttle bus from the London Terminii? Bugger all?

Anyway, what's the royal protocol on where you put all these cars? First of all you appropriate the cycle path.

When that's full you take over the park itself.

What you don't permit on any account is on-road parking on the multi-lane Mall.
Blimey, the police have kept that clear. They've clearly failed on Horseguards Road though where you can rely on the Aussies to take a stand in favour of climate change.

Posted by Charlie Holland at 18:58

Boris refuses to back removal of E&C roundabout

Boris's commitment to maintaining a huge volume of motor traffic passing at speed through this part of Central London is a real obstacle to its development as a pleasant place to walk, cycle or linger.
Posted by Charlie Holland at 18:21

Email ThisBlogThis!Share to TwitterShare to FacebookShare to Pinterest
Labels: EandC

Brian and Richard, above, opened Balfe's Bikes next to the South London Pacific pub just south of Kennington Cross yesterday. It's so new the name board hasn't yet arrived - it's the shop with the red fascia below. I'm giving them an enthusiastic welcome as the owners are also involved in BC Bikes in East Dulwich which donated old shop fittings to the Pedal Power Kennington community project. They're Cytech qualified mechanics so you can be assured they know what they're doing when you take your bike in for a service. Drop in quickly and you might get one of a limited edition of badges which give a longterm 15% discount at the shop.

As you can see there's no cycle parking along this parade, despite a wide pavement and thousands of cyclists passing each day. The road is managed by Transport for London and you've got to wonder why they haven't sorted decent cycle parking out anywhere along here. I suppose that people stopping to shop wouldn't help TfL's obsession with meeting Boris's key objective - Smoothing Traffic Flow through preventing the stop-start journeys that bikes are so useful for.
Posted by Charlie Holland at 10:15

I teach on-road cycling to children at a number of schools in Westminster and these new images from two different organisations strike a real chord with me in the parked-up, congested, noisy, polluted environment they live, work, play and travel in. Sustrans has hit the nail on the head with 'Free Range Kids' - please take the action they recommend. I'd also advocate joining the Climate Rush cycle flash mob from Soho Square on Wed 13 July at 6.30pm who use the image below.

Thankfully Westminster council is considering introducing Sunday parking fees and restrictions in Mayfair, Marylebone and Soho. Unbelieveably the churches, who one expects to be in favour of stewarding the Creation rather than destroying it, are objecting to this with at least one boasting that half its congregation drive to church!


The Rev Roderick Leece, rector of St George's in Hanover Square, has launched a petition against the plan and says he has thousands of supporters.

He said: "We need a campaign to stop this destructive move. Where Westminster leads, other councils will follow. If Sunday parking restrictions become the norm this could have an effect on many other inner-city churches and cathedrals.

"At least half of our average congregation drive to church on a Sunday. Having to find a parking bay and pay £4.40 per hour will deter a number of worshippers."

Doh! They could walk, cycle or use the excellent public transport service.
These petrol heads are meeting the Council tonight at the church at 7.45 - some dissenting voices would be good
Posted by Charlie Holland at 09:08

The Royal Parks Agency manage Horse Guards Road and I have had a prompt response to my email about the advertised closure:
From previous closures it normally seems that the pavement adjoining this very wide road remains open and that events rarely take up the full width of the road, allowing the potential for a temporary two-way cycle path adjoining one of the pavements.

Please can you let me know whether this is something that you attempt to instigate when closing this road, which I think you'll agree is a much better road for cyclists than Whitehall, and if not whether there is the chance to trial it during this closure?

The Assistant Park Manager at St James's Park wrote:
This is something which is currently being discussed with the organisers, i.e. keeping a two way cycle route open when Horse Guards Road is closed to general traffic for the build of this type of event. I am awaiting a proposal, and will get back to you when I have further information.

I'm delighted that this is being discussed and I'm keeping my fingers crossed, though I'm a bit nervous that we're a couple of weeks away from the closure and a proposed option hasn't yet been presented to the Royal Parks, and even then it may only apply to the build and not the duration of the event itself.

I'd imagine that the more cyclists write in the greater the likelihood of a way being found.
Posted by Charlie Holland at 18:23

“We are delighted to be able to join forces with Michelin to give 7,000 children across Staffordshire cycle helmets, so that they can get out and about and enjoy themselves in safety.” says Staffordshire County Council's Cabinet member for highways and transport Mike Maryon.
Posted by Charlie Holland at 00:00