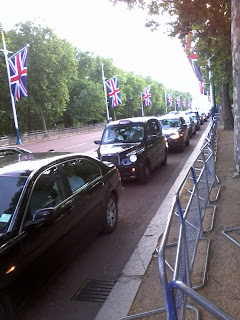 The Mall was more awash with black cars than normal as I passed through today. In addition to the usual belching black cabs we had shiny black cars by the dozen. 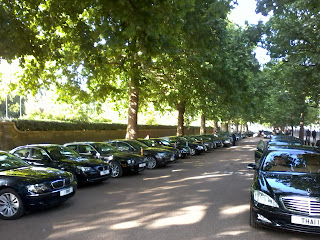 Just for a laugh, here's a Google Map showing The Mall plus 'Embassy' which shows that most of the embassies are within easy cycling or walking distance of the Mall, or a short bus ride.

TfL recently produced a report,  'The Analysis of Cycling Potential' , which seeks to identify current trips which could reasonably be cycled all the way, but aren't at present. It says:

The Mayor has set an ambitious target to increase levels of cycling in London by 400 per cent by 2026. To achieve this it would be necessary for one in every six potentially cyclable trips to be cycled each day, throughout the year, based on the trip volumes of today.

The report's intro states, "In „Cycling Revolution London‟, the Mayor sets out his vision for London to become a cyclised city: one where people can ride their bikes safely, enjoyably and easily in an environment that embraces cycling. Making this a reality requires that physical and cultural changes are made in the city, demanding further investment, strong partnership working across the Capital and continued political leadership."

Sorry, Boris, I don't think the Ambassadorial elite are interested in showing that kind of political leadership and working in partnership with you to achieve cultural change. They'd rather show off their congesting, polluting toys.

Posted by Charlie Holland at 20:47