The Vauxhall factory moved; now can the Gyratory? 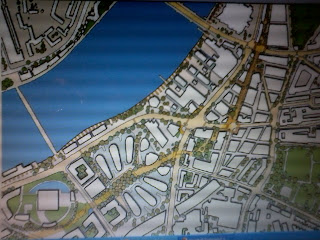 My grotty photo is of an interesting plan produced by Lambeth Council working with TfL by Farrells, SKM Buchanons and Lambert Smith Hampton. It's part of a document being discussed by Lambeth's Cabinet on Jan 16th. (For a clearer image you'll have to download this PDF .) Here's the text from the page that, despite not mentioning cycling, seems promising - now is the time to push for real change:
"Aiming to unlock the potential of Vauxhall, it offers a vision of how Vauxhall Cross could  change to deliver a sustainable community to reflect the vision agreed by the strategy board. The plan draws upon some of the history of the area when there was an identifiable High Street and looks forward to create a major transport interchange, a gateway to the city and a modern, vibrant and sustainable district centre. It intends to offer a centre to complement both Lambeth and London, and to be achievable within the framework of the OAPF and Lambeth Core Strategy.

The plan outlines a coherent and legible centre, easily negotiable for residents and visitors, with the historic barriers of the gyratory and the railway lines over come.Communities previously isolated to the east and north east, are re-connected to the river, the areas greatest natural resource- itself enhanced through the Thames walkway.

The numerous green spaces enjoyed by the area are now similarly now connected and linked to the proposed Linear Park, facilitating safe pedestrian movements. Pedestrian movement is further facilitated within the plan as road junctions and crossings are simplified from over 30 to 20 and transport barriers are reduced.

Central to the plan is the restoration of a high street at the centre of Vauxhall, to provide a heart and focus, along the Bondway, the strip currently occupied by the bus station.

Rather than a pedestrianised area, this is intended to be enlivened by allowing buses to pass through, and both sides will enjoy active retail frontage, thus providing valuable employment space and contributing further to Vauxhalls economic vitality. A Civic Town Square is proposed next to the existing station as a potential venue for community and cultural events. It is intended that this is an area of mixed use, both within the streets and the buildings themselves.

The plan allows for the development of tall buildings as described in the emerging OAPF, but describes how streets can be created so that those buildings have a context.
Transport, and the management of Vauxhall as an interchange remains essential and the proposal, is to remove the bus station and replace it with a series of bus stops, facilitating the bus routes and journeys. The plan anticipates the return of two way working, in place of the current gyratory, which exacerbates traffic and its attendant problems, but does not rely upon it."
Posted by Charlie Holland at 21:47