Act now on the Stupidity of the Commons

Cycling should be permitted on more routes across Tooting Common than the one currently allowed, in order to avoid busy roads. Some information on this follows; more is here.

The forthcoming local elections give a chance to elect Councillors agreeable to this change, but there's also a chance to influence this right now as the Friends of Tooting Common are asking people to respond to a simple one-question survey.

Please take one minute to fill in the survey answering the question with 'Other:  Permit cycling on more paths across Tooting Commons'.

Encourage others to do so too ( surveymonkey.com/s/SW5V2HQ  ) so we can get this request into the Tooting Commons top three requests for Wandsworth monies.

Read on for more detail:

Yesterday a police sergeant for Graveney in Wandsworth tweeted about his enjoyable ride across Tooting Commons.

I should imagine he was using the blue line on the map below, where cycling is permitted, to travel from Lambeth in the north to a part of Wandsworth in the south (the black line shows the borough boundary line, Wandsworth to the west; Lambeth to the east).

If the sergeant had wanted to cycle from Emmanuel Road in Lambeth to Drewstead Road in Lambeth, following the red route, he would be in breach of signage banning cycling (I don't think anyone knows if bye-laws exist actually banning cycling here) and the police would be likely to be out enforcing it, as you will see has been happening on the southern end of the Common recently. This is despite the red routes in particular being hugely desirable, safe and perfectly reasonable routes for cyclists on wide sections of path (pics of the Lambeth to Lambeth section are here). At a recent Tooting Commons meeting the police stated that there have no serious injuries as a result of people cycling on the Commons. 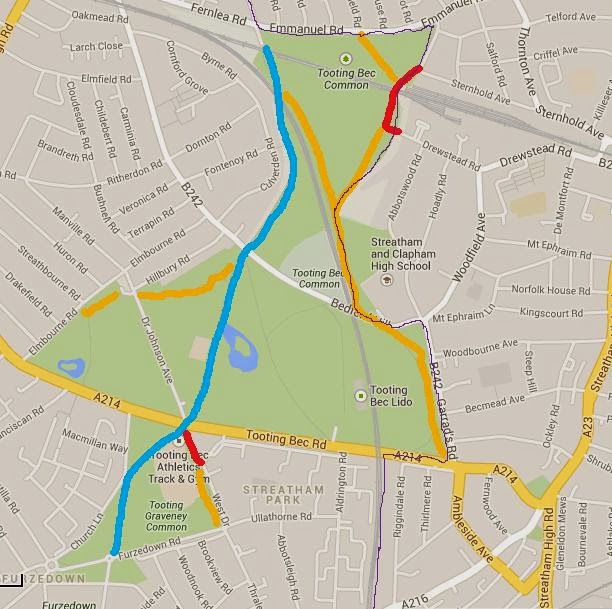 A few days earlier a member of the public copied me in the correspondence he's had with the police (I've removed names, and it's nothing to do with the sergeant tweeting above so don't abuse him on Twitter!) about cycling on the path to the east of the Athletics Track on Tooting Graveney Common (marked red, where I think there should be no doubt about cycling being permitted) and orange (where I think cycling should be permitted, but would view closing West Drive to through motor traffic to be a reasonable alternative). This leads to the Toucan crossing across the A214, Tooting Bec Road, a sensible place for people (adults and/or children) to cross a major road that most wouldn't choose to cycle along. Here's the exchange of letters:

Once again yesterday my wife was stopped by police while taking our 7 year old child to and from school, safely and sensibly by bicycle, on the generously proportioned path next to Tooting Athletics Track to avoid one of the busiest roads in south London.

As I have outlined in previous correspondence, this action is endangering children’s lives by forcing them to negotiate with busy traffic and HGVs. The path is the same width and runs directly into another authorised cycle path that dissects Tooting Bec. It is used responsibly by hundreds of cyclist everyday without incident.

The police have said that there have been complaints by dogwalkers about irresponsible cyclists. That is regrettable but this is a) a symptom of the lack of cycling provision on this path b) completely irrelevant to a responsible 44 year old woman taking her small child back and forth to school c) will not be solved by occasional strong arm tactics by local police.
This is a waste of police time and tax payers money, and is turning responsible citizens into criminals.

Furthermore I too would like to make complaints about dog walkers allowing their animals to foul the Furzedown streets and excessive speeding in the Thrale road area and would now therefore expect the relevent increase in police patrolling the area to deal with these problems.
The lack of provision in Wandsworth and the demonising of cyclists is tantamount to a shameful cycling vendetta by local police and the council.
--------------------------
POLICE REPLY

Thank you for raising this matter. I am sorry you feel that your wife is "demonised and subject to a vendetta", which I assure you is not the case. Five other cyclists were also spoken in the same period your wife was stopped by the MPS Safer Parks Team.

This is a clearly marked path and the signage is clear and shows it is an offence to ride a bike on this footpath. Your wife should dismount if this is the only route available to her.

Those cyclists who comply with the law have nothing to be concerned about it is only those who contravene the law who will be reported and then it is a matter for the courts to decide any sanction.

Wandsworth Council have no intention currently of making it dual use and therefore it remains an offence to ride on this path. This is a matter for the council.

Enforcement action will continue across the borough in a proportionate and targeted way. Two thirds of the tickets under the ongoing MPS's OP Safeway have been given to vehicles while only a third have gone to cyclists. A big issue on Wandsworth has been the rise in those killed or seriously injured in collisions involving cycles - we are now working hard to reduce this and part of this is responding to those few cyclists who break the law.

Dog fouling is matter for WBC's Dog Control unit outside of the Park - In the park the Safer Parks Team enforce with an even hand and have reported owners of dogs that foul, those that have dogs out of control and those that carry out licensing dog walking with excess numbers of dogs as well as those that do not have the correct fishing permits or those that cause criminal damage by fly tipping.

Regarding your concerns regarding excess speed along Thrale Road, I would be grateful if you could assist me with any evidence of these offenders, such as time of day when it is prevalent so I can task our neighbourhood officers to counter this report of illegal activity.

With regards the use of Police for such matters, the Met Police Safer Parks Team is funded by Wandsworth Council to police the byelaws in the parks and open spaces of Wandsworth.

Thank you for contacting the Metropolitan Police. I am sorry you are unhappy with our activity but our enforcement will continue.

MEMBER OF THE PUBLIC

Thank you for your reply Mr XYZ
I asserted that I thought that the lack of provision and the demonising of cyclists was tantamount to a vendetta against cyclists, not my wife. I'm not sure if she shares this opinion but I'm certain that she thinks the policing of this particular path, in the manner it is carried out at the moment, to be ludicrous. But I note your ironic quotation marks and I'm pleased that my efforts to try and ensure the safety of my children causes you amusement.

Your policing of this path goes directly against the guidance outlined by Mr Paul Boateng MP, issued in 1999 and recently ratified by Michael Goodwill, Minister for Transport, which says:

The introduction of the fixed penalty is not aimed at responsible cyclists who sometimes feel obliged to use the pavement out of fear of traffic and who show consideration to other pavement users when doing so. Chief police officers, who are responsible for enforcement, acknowledge that many cyclists, particularly children and young people, are afraid to cycle on the road, sensitivity and careful use of police discretion is required.”

Although this is guidance on the issuing of Fixed Penalty Notices, it clearly describes the situation my wife and indeed I find myself in on taking my child to school.

You assert that those cyclists who "comply with the law have nothing to be concerned about", but if I take my 7 year old on one of the busiest roads in South London, I very much believe I have a lot to fear, hence why we cycle considerately on this pathway, which let's not forget, is the same generous width as the "authorised" cycle path it leads directly into and is used safely and respectfully by hundreds of cyclists every day. I have used this path morning and evening every day for the past 13 years and have caused no distress or disturbance to anyone.

You assert that "Enforcement action will continue across the borough in a proportionate and targeted way" again, I ask, is stopping a woman and a small child cycling to school in a safe and considered way to avoid  heavy traffic, proportional?

And that "A big issue on Wandsworth has been the rise in those killed or seriously injured in collisions involving cycles - we are now working hard to reduce this" - again forcing small children and their parents onto busy roads seems an unusual way to do this.

In the past I have been informed that there have been complaints about "aggressive" cyclists, but again, does my wife fit the description of this type of offender? The truth is, people will continue to use this path everyday, it defies logic not to do so. Why not concerntrate effort on making it safer for cyclist and pedestrians alike, rather than demonising people who are just trying to get on with their everyday lives?

And frankly having officers chipping up once a month and threatening mothers taking their kids to school, will not effect someone who is an "aggressive" cyclist anyway, it's using a particularly badly aimed sledgehammer to crack a nut that doesn't actually need cracking in the first place.

You ask about the speeding on Thrale Road, and the time of day and evidence, the answer to that is simple, send an officer there any evening, but again, in 13 years, I haven't once seen that happen either.

If, as you suggest, your particular section is funded by Wandsworth Council, then I would advise a better use of funds might be to improve cycling provision across the borough, rather than targetting beleaguered cyclists. I cycle everyday from Furzedown to Hammersmith and the chaotic, ill-advised, disjointed, cycle paths that I have to negotiate, are a disgrace.

Thank you again for having the courtesy to respond, I hope my correspondence initiates a more common-sense approach for the Safer Parks team and council alike.