Where the hell are the robust defenders of the EU?

This post has been a while in gestation, prompted initially by the low key campaigning  for the recent elections for Members of the European Parliament, and the uniformly dreadful quality of the electioneering pamphlets put through the door.

I'm damn certain that being within the EU  must bring benefits as well as downsides and I am astounded at the way that the press uniformly bangs on about 'Brussels bullies' without correspondingly strong and emotive articles and quotes praising its achievements and challenging the attacks made on it.

Just look at the current media storm about limiting the power of vacuum cleaners.

The genesis of this appears to be Which? advising that many of its current best buys are above the new EU 1600 watt limit from September, so people wishing to purchase these should do so while they can.

Cue rants from the press starting on the 21st August:

Daily Express headline: After light bulbs and TVs... now EU officials BAN our vacuum cleaners. THEY have forced us to change our light bulbs and banned our power-hungry plasma TVs.
(followed by a full on Comment rant the following day)

Daily Mail: ..thanks to a ruling by bureaucrats in Brussels, domestic goddesses among us may soon be robbed of the most vital tool in our arsenal..... Worse is to come. From 2017, the maximum wattage will be lowered still further, to just 900watts, sounding the death knell for some of the most popular vacuum cleaners.

Daily Mirror: Brussels busybodies are set to pull the plug on vacuum cleaners with motors bigger than 1,600 watts.

Independent Comment: News last week that an EU ban on cleaners with motors above 1,600W comes into force within days had even the most diffident householder dashing protectively towards the bear-slayer in the understairs cupboard. No more, the comforting tug of roller brush on carpet once the high-powered appliance has become extinct: in its place, a sluggish, futile skimming and a posse of fat, happy mothlings, dancing all the way to your only cashmere jumper. Basic hygiene must give way...

On the political front, UKIP unsurprisingly jumped in
"This is being done in the name of tackling climate change but the reality is it will do nothing to help and just make life harder for house-proud Brits," said Ms Bours, UKIP Euro-MP. "The reality is this EU legislation just sucks and is another reminder of why we need to leave the European Union."

as did Vauxhall's eurosceptic Labour/Independent MP Kate Hoey who tweeted,
Just got my high powered vacuum cleaner.How dare EU tell us what to buy. Just another reason to have a referendum @Lab4aRef #Europe

Having banged on about Brussels bullies, most of the media only quote an EU spokesperson in support, e.g. The Scotsman,: “Vacuum cleaners will use less energy for the same performance. This will help consumers to save money and make Europe as a whole use less energy.”

Why are no politicians quoted vocally supporting the EU's measures regarding vacuum cleaners at this time?
I've yet to see a newspaper quote a main UK party politician backing the EU's policy here, or see a paper's commentator cheering on Brussels, and I want to see well-argued support for the ruling from politicians and political commentators who are in favour of us remaining in the EU.

After all, there are lots of positive things about this measure.

Firstly, this isn't a surprise change - it's part of a Europe wide  range of measures to tackle human caused climate change that were drafted, debated and voted on by our elected MEPs in 2005. It's brilliant that a range of countries can agree on sensible measures across a range of countries and  then put them into action.

The decision to limit the power demand of vacuum cleaners derives from Directive 2005/32/EC of the European Parliament and of the Council of 6 July 2005 establishing a framework for the setting of ecodesign requirements for energy-using products. Domestic appliances, alongside a number of other areas, were deemed priorities.

Vacuum cleaners are one of the domestic appliances benefiting from a systematic approach to improving the ecodesign of domestic appliances without lowering the functionality of a product, its safety, or having a negative impact on its affordability or consumers’ health. It's brilliant that our Brussels boffins have thought through the principles and rationale of ecodesign so well.

This PDF is worth a read
http://ec.europa.eu/enterprise/policies/sustainable-business/ecodesign/files/brochure_ecodesign_en.pdf
Here's an extract:


All products have an impact on the environment during their life-cycle spanning all phases from cradle to grave, including the use of raw materials and natural resources, manufacturing, packaging, transport, disposal and recycling. More than 80% of the environmental impact of a product is determined at the design stage.

Ecodesign involves taking into account all the environmental aspects of a product, right from the earliest stage of design. In particular, this avoids uncoordinated product planning (for example, eliminating a toxic substance should not lead to higher energy consumption, which on balance could have a negative impact on the environment).

The Ecodesign Directive provides a coherent and integrated framework which allows setting mandatory ecodesign requirements for some products. For instance, the Ecodesign Regulation on standby requires that many domestic electrical and electronic products such as washing machines, TV or personal computers do not consume more than 0.5W in off mode as of 2013.

However, ecodesign requirements must not lower the functionality of a product, its safety, or have a negative impact on its affordability or consumers’ health.

Taking that last point, The Daily Telegraph, in 2010, reported,


Paul Pearce, technical director of the national carpet cleaning association, said: "The performance of a vacuum cleaner has more to do with airflow than with the power rating, so it should be possible to reduce the power without affecting the cleaning performance."

Is there any benefit from reducing the power consumption? The PDF linked above states,


By 2020, the first Ecodesign Regulations on 13 product groups (see Table 1) are projected to allow energy savings equivalent to more than 12% of the electricity consumption of the EU in 2009 (compared to a ‘business as usual’ scenario).

The benefits from efficient but lower powered vacuum cleaners contribute to that 12% saving, not just in the UK but across all 28 members of the EU. January 2014 figures show there are 507 m people living within the 28 member states of the European Union. At an average household size of 2.4, there are some 211 m households, and I'm going to guess that at least one in two households in Europe has a vacuum cleaner.

Pushing through measures that, as machines are replaced, reduces energy use in an appliance used in 105,000,000 homes in Europe. That's brilliant.

If I was a manufacturer I'd rather have the task of creating an almost uniform product to sell to a 211 m household market, with agreed safety and power measures across all 28 countries. That's brilliant, as I'd hate to have to tailor my vacuum cleaners to each of the 28 member countries own idiosyncratic rules, but a set power limit in 28 countries provides me with one heck of an incentive to design and manufacture a market winning machine within that limit. It's worth noting that two of Which's existing 'Best Buys' already are within the new power limit, and that the chunky mega-cleaner, Henry, only has a 1200 watt motor.

The set limit also means that my product range doesn't need to include a stupidly powerful vacuum cleaner to get the custom of consumers who insist on buying the highest powered device available, regardless of their need for it or its real efficacy.

So there you have it - a carefully planned process to meet a sensible energy use goal that benefits the residents of 28 countries and allows manufacturers to design one product that meets the specification of all the countries. Brilliant. Well done our EU.

Please can some politicians and mainstream papers present a positive argument on EU topics in the future, to help me make up my mind. 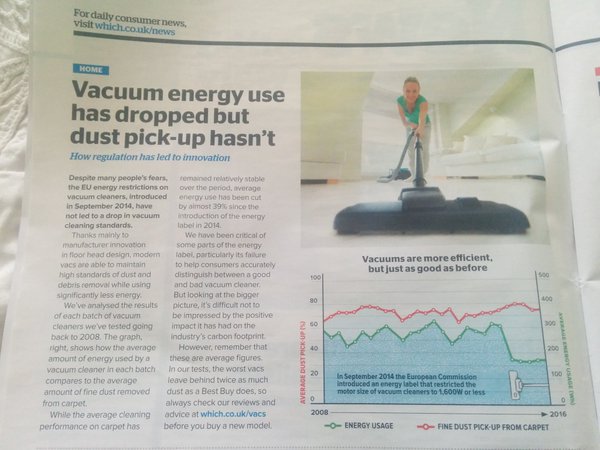 Posted by Charlie Holland at 11:33