Consultation on A23 Brixton Hill and Streatham Hill bus, lorry and cycle lanes

TfL are consulting until September 14th on plans to improve peak hour conditions for buses on the desire line between Streatham, Brixton and Central London. Their scheme (only to run during peak Monday to Friday adult commuter hours) does nothing to encourage people to cycle - you are not going to see more pupils after school socially cycling along Streatham Hill to the ice rink.

TfL's plan totally ignores Lambeth's intent as laid out in its formally-adopted cycling strategy:
"Lambeth wants to encourage more cycling and believes that the only way to do this is to make cycling safe and attractive for a broader cross section of people. Anyone who wants to cycle should be able to – women, children, parents, older people – as happens in Denmark and the Netherlands. Our vision therefore is that: Lambeth will be the most cycle-friendly borough in London where 1- 100 year olds feel safe enough to cycle."

I think it makes complete sense to improve bus efficiency, but not at the expense of people who would like to walk and cycle. How could we get 24/7 cycle tracks and bus efficiency without stealing pavement as TfL plan to do in their scheme? We could take a Copenhagenize diagram as our inspiration - giving the straighter lines to pedestrians, cyclists and bus users: 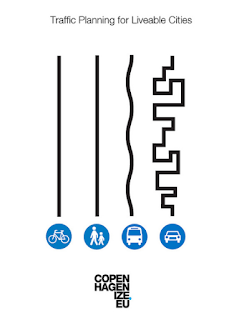 Through banning cars and small vans from the A23, providing them with the exciting new Wiggleway (TM) in red below, space can easily be created for a cycle track on each side of the A23 with plenty of space for loading bays and floating bus stops, and a lane in each direction just for buses and lorries. 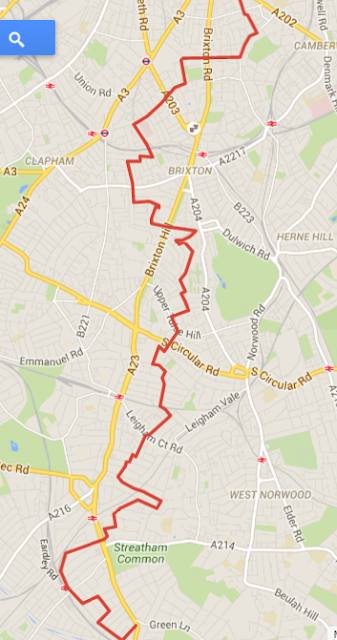 The scheme may seem a little radical, but it's always good to know that options exist that don't give under-occupied cars priority over active travel on quality routes.

Please have a look at TfL's proposals and ask yourself how they could be improved (a simple example: make the bus/cycle lanes 24/7 or 22/7 or similar) and share the ideas, and respond to TfL and your councillors.

Posted by Charlie Holland at 17:18