Sticking plaster on a running sore 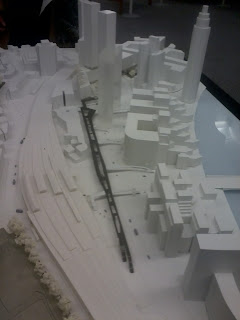 CLS Holdings plc, a property company in Vauxhall, have a very tall buildings project planned. They also propose a 'Linear Walkway' as a solution to the problem of pedestrian movement around Vauxhall Gyratory. It's deeply questionable whether it will improve the environment for cyclists. 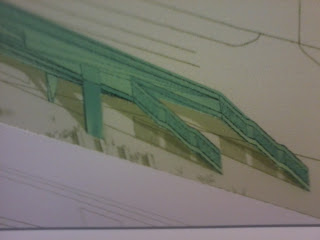 A cynic might suggest that proposing an innovative walkway scheme could be a wonderful example of the type of misdirection used by magicians who wish to draw attention from an important issue - maybe in this case the height of the proposed buildings.
But my concern is a different kind of misdirection. Laying a pedestrian walkway over the Vauxhall gyratory does nothing to resolve the (literally) underlying issue of an enormous amount of space given over to motor traffic. During rush hour today I attended the exhibition put on by the developers at the top of Market Towers on the Gyratory. From ground level and then looking down from the heights of the Towers it was quite clear that the vast majority of motor vehicles dominating this area are not lorries, vans or buses, but cars, mostly with a single occupant.

And the solution to the urban blight of Vauxhall is not a sticking plaster walkway over the top but a major operation to cut out the needless use of the private motor car in Central London (and let's be clear, with the American Embassy, Battersea Power Station Development et al this IS Central London now). 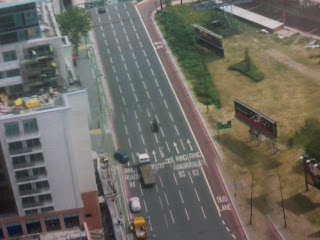 I hope the Vauxhall, Nine Elms, Battersea Opportunity Area Planning Framework will force a proper resolution of this issue throughout the area. I have my doubts, not least because, mindboggingly, the Vauxhall Gyratory isn't included in the area!

I urge you to write to your MP and Councillors, and to Transport for London, making it clear that you consider the continuing dominance of the single occupant motor car, blighting this area, to be completely unacceptable.
Posted by Charlie Holland at 23:19