There's NO space, NONE AT ALL, for a cycle lane

An explanatory message about today's Constitution Hill closure for the Bomber Command Memorial ceremony in Green Park, brought to you from the Royal Parks and everyone else involved in the event .

"Look, it's patently bloody obvious. There's a ceremonial event going on in the park. It needs TV cameras and taxi unloading so there is absolutely no room for a two-way cycle lane - there just isn't. Use your eyes. Can't you see - there's no room to swing a cat, let alone an elephant here. The road is totally full, congested, stuffed and, let's face it, cycles are way too noisy - the clanking of gears and puffing of the drivers as they peddle up the hill might drown out the noise of the service in the park behind the TV wagons. Anyway it'd cost billions of pounds to move the metal barriers two metres to the right. 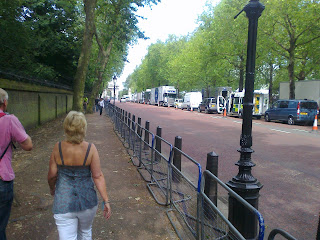 No, better off by far if you just dismount and walk with the pedestrians, or even better still just avoid the whole of Green Park and mix it with the lorries, taxis and limousines on Hyde Park Corner. In fact, better still, why don't you just leave your sodding bike at home and drive to where you're going like any sensible person. 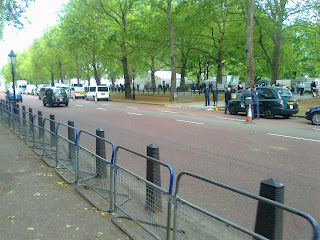 Don't you understand anything? There's a war on - listen to the bombers overhead. Keep calm and don't carry on. There is just no space for cyclists in our lovely parks. In short, Fuck Off.

What are you asking? Is the pavement designated shared use for cyclists today? We've no idea - I mean, who gives a flying fuck. 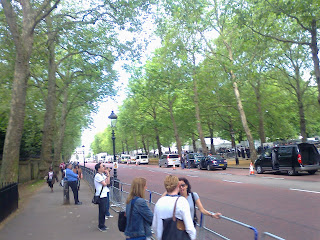 You want to know if we've thought about the alternative route coming home when you come through the Wellington Arch and see the road's closed? It's bleeding obvious isn't it - go round Hyde Park Corner. If there's one thing we've learnt from the war, it's that a bit of spine stiffening is good for you, casualties are inevitable but you'll be fine if you keep your wits about you.."

Posted by Charlie Holland at 18:44