Why cyclists ignore signs, at least in the Royal Parks

I wonder whether any senior member of the Royal Parks staff rides a bike.

If they do, I also wonder if they obey the 'Cyclists Dismount' signs every time they cross West Carriage Drive, the road dividing Hyde Park from Kensington Gardens.

I mean, why on earth would you? There's a cycle path to the road, then the road to cross, then a cycle path the other side. A 'Cyclists Take Care' sign here could be argued to make sense. But 'Dismount'. Totally bloody ridiculous.

However not dismounting can really piss off the drivers who think they may have to give way to pedestrians here and know that the tax-dodging, law-breaking cyclists should dismount before crossing. Motorists know this because can see the 'Cyclists Dismount' sign. 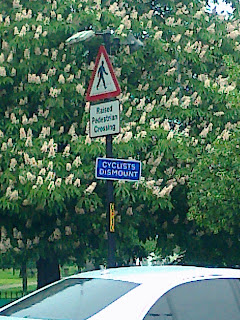 They're not to know that cyclists coming from Kensington Gardens to Hyde Park can't see a 'Cyclists Dismount' sign, because it's been turned to face the drivers for the past few months. A recipe for conflict that the Royal Park authorities either haven't known about because they don't ride bikes or, if they do, is seemingly on the 2014 list of things to fix. 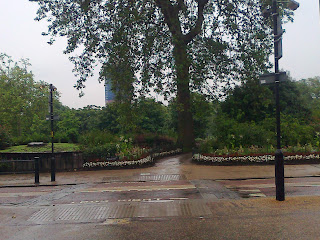 There are other signs of sign blindness. Like the existing sign saying 'The Mall Diversion Ends' as you're approaching the Mall, which has been shut for weeks and will stay shut for the Olympics activity on Horse Guards Parade. 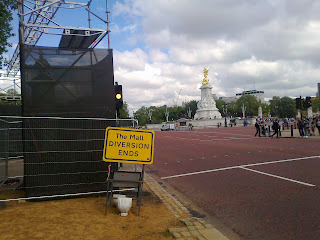 This exchange of emails I had with the Park Manager, St James's Park and The Green Park, in March reveals the disinterest in getting signage correct:
------------
Subject: The Mall closure on Sundays
Can you please let me know why there is not an exemption permitting cyclists to cycle along the Mall and Marlborough Road on a Sunday when the road is closed? It would seem an excellent opportunity for families to cycle there, especially as it is part of a recommended cycle route. Do you have plans to permit cycling on these roads on Sundays in the future?


Park Manager Reply
Your e-mail regarding not being able to cycle on the Mall on Sundays comes as a surprise to me, and to our police inspector also, in that we do permit such exemptions! I certainly am passed by many cyclists on the Mall when I am doing my rounds on a Sunday.  The only time this is not the case is if we have a specific event on - such as this coming weekend when we host the Sport Relief Mile - or whilst Changing the Guard is taking place.

If you have been prevented from doing so I suspect it may have been by officers tasked from other areas who may not be especially familiar with the park?

I do apologise if this has been the case and my Inspector has reminded his officers that this is something we do permit, on the consideration of course that the activity being conducted is in such a manner that it is not discourteous or a danger to others.

Me to Park Manager: 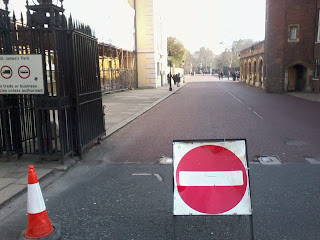 Given the Royal Parks' intent that people can cycle on the Mall and Marlborough Road on a Sunday can you please arrange to replace the temporary 'No Entry' signs you currently use (photo attached) which the law states applies to vehicular traffic, including pedal cycles, at the entrance to the Mall and Marlborough Road with the 'No Motor Vehicles' sign (flying motorcycle over car) or have the recently permitted 'Except Cycles' added beneath the 'No Entry' signs?

Park Manager reply:
Thank you for your suggestion. We will give this some consideration.

Me to Park Manager:
It'll be great if these can be corrected. I teach cycling to pupils in Westminster schools, including not only the meaning of 'No Entry' signs, but also of course the importance of obeying signage including the 'No Cycling' and 'Considerate Cycling Permitted' signs in the Royal Parks (normally Kensington Gdns/Hyde Park/Regents Park) that we visit on Fridays!

Park Manager reply:
...and of course you are absolutely right! I am just surprised that it has taken over 20 years for anyone to raise this with us or even for ourselves to notice!!

I need to look at my budget and at what signs are available. If we are unable to replace outright it may be a phased introduction as and when other signs get damaged.

Posted by Charlie Holland at 10:46