This may be a little off the patch for many of my Kennington readers, but it's still important for you to comment. Schemes which work inspire others to emulate them (would London have Barclays Bikes if Paris  hadn't?). So, if you want Kennington to be cycle friendly you need to try and get other Lambeth initiatives to really boost cycling - and the proposed Clapham Old Town schemes just aren't good enough to do that.
Lambeth Council are consulting on very expensive plans for improving Clapham Old Town  (at the top end of the Common) yet, unacceptably, neither of the options currently on the table resolve some major barriers to cycling here.
If either of the plans proposed by the Council are approved as they stand, those wishing to cycle in a direct line from the Clapham Park Road area, through Clapham Old Town, towards Chelsea Bridge will still have to make a circuitous detour (see the map), away from the Old Town, on very fast and busy main roads, if they dare. Many adults don’t dare and even those who do are hardly likely to allow their children to cycle on these roads. 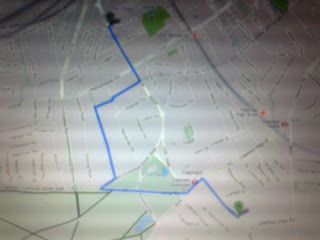 Everyone (and local residents in particular) who would like to see Clapham Old Town become a great place to cycle through and around needs to send a quick email to the Council NOW (or certainly before 21st July) – claphamoldtown@lambeth.gov.uk - saying that you can’t accept either proposal as they stand and that you want to see the scheme reworked to make the area much more cycling friendly. Please also give your address. Ideally you’ll copy in your local Councillor as well if you live in the vicinity.

After all, It's not as though there's not enough road width for The Pavement to become two way for cyclists 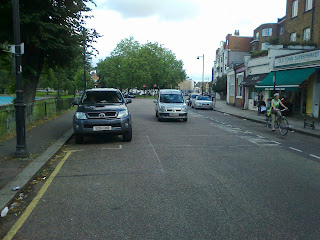 Put simply, the plans on the table at the moment don’t meet Lambeth Council’s own, Mayor of London approved, Transport Plan.

Lambeth’s Transport Plan puts pedestrians and cyclists at the top of the hierarchy of road users, because these are the ONLY travel choices that totally meet Lambeth’s five key transport objectives:

Instead both draft schemes focus on maintaining the motoring status quo while preventing cyclists from having calm, family friendly routes that permit them to frequent the useful shops and cafes in the Old Town.

"Prioritise the needs of pedestrians, cyclists and bus users and make walking, cycling and bus use more attractive and accessible to encourage more journeys by these modes."

"The Cycle Route Implementation and Stakeholder Plan (CRISP) identified that there are currently significant barriers to providing attractive conditions for cyclists. These include conflict between cyclists & pedestrians/motor vehicles, lack of priority at some junctions, and the large Clapham Old Town one-way system resulting in cyclists taking different routes in each direction. London Cycle Network (LCN) route no 3 passes through the area. There are several points and sections along the proposed route which are likely to cause problems to cyclists."

Having shown the existing plans’ weaknesses, it is only fair to point out that there are some significant improvements for pedestrians and some for cyclists too, particularly a plan that allows cycling in a southbound direction along Northside

Finally, unless you have a firm view about the bus locations, I recommend you don't complete the poorly designed on-line survey, as it doesn't have have a button for 'Devise a better option'.
Posted by Charlie Holland at 00:07