At 5pm today I was watching the Gandini Jugglers outside the National Theatre, where Critical Mass, the 'no leader' bike ride sets off from around 7pm on the last Friday in each month, when a group of cyclists arrived. 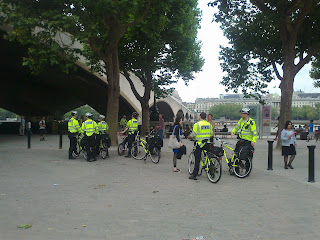 Shortly afterwards this group of their mates arrived. 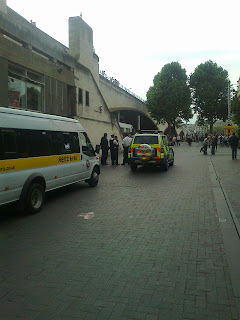 Was joining Critical Mass appealing to me tonight? No. Was it likely to go towards the Olympic Site on the opening night? Yes.

Were the arrests reported on Twitter tonight near the Olympic site fair? I don't know, I wasn't there.

But I will say that I consider the provision made by the Mayor of London for people wishing to cycle during this time has been really poor.
Posted by Charlie Holland at 00:14