I think we're much less likely to see Ice Cream vans trading while parked on Westminster Bridge in the cycle lane, bus lane and red route. 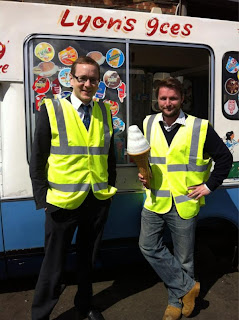 Above are Lambeth Councillors Jack Hopkins and Pete Robbins standing by an ice cream van that's about to become this: 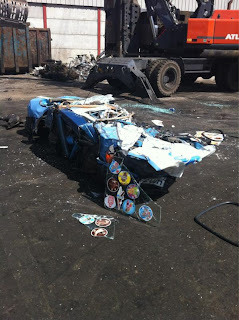 The council went to the High Court to seek injunctions against two street traders who had persistently set up ice cream vans to trade illegally along the South Bank around Westminster Bridge.

Street trading at the tourist hotspot is closely regulated to ensure that tourists and other visitors don’t end up being ripped off or sold potentially harmful food or other items.

However, with millions of tourists visitors visiting the area every year, the area attracts unlicensed hawkers keen to make a quick profit.

Cllr Jack Hopkins, Lambeth Council Cabinet Member for Public Protection, said: “The Southbank is one of London’s most popular tourist destinations and we’re determined to do everything in our powers to tackle cowboy traders who try to operate there. I hope this sends a clear message that we are prepared to use all legal powers at our disposal to protect the public and crack down on unlicensed traders who clearly believe they are above the law.”

Working closely with the South Bank Employers’ Group, the council took the unusual step of seeking injunctions against Ms Elma Sanli and Mr Ndue Meli after it became clear that they were prepared to ignore the threat of fines and on the spot penalties. Despite being taken to Magistrates’ Courts on a number of previous occasions by Lambeth Council for street trading offences, the financial penalties issued by the courts were often not sufficient to deter a hard core group of illegal traders from regularly visiting the South Bank area.

On the 13 June applications for interim injunctions were heard against both of the defendants Ms Sanli and Mr Meli. The defendants chose not to dispute the injunction applications; they instead sought to provide the court with an ‘undertaking’ with regard to their future behaviour.

However, the Judge accepted the council’s view that the injunction orders were essential in tackling unlicensed street traders who continue to flout street trading regulations. The interim injunctions prohibit Ms Sanli and Mr Meli from trading anywhere on the South Bank and if they breach these orders, they could face a fine or imprisonment.
Posted by Charlie Holland at 09:12