Each year the Department for Transport issue a publication: Reported Road Casualties in Great Britain:

What counts as a reported road casualty? "All accidents that were reported to the police and occurred on a public highway involving at least one motor vehicle, horse rider or pedal cyclist, and where at least one person was injured are included."

If a motorcyclist misjudges a bend, crashes into a wall and is injured sufficiently to need an ambulance s/he will be included - a motor vehicle was involved and a person was injured.

If a pedestrian trips on a kerb and is sufficiently injured to need an ambulance s/he will not be included as no motor vehicle, horse rider or pedal cyclist was involved. Similarly two pedestrians colliding resulting in injury or death won't be included.

The Report goes into considerable detail about who was killed or injured. Here's an example: 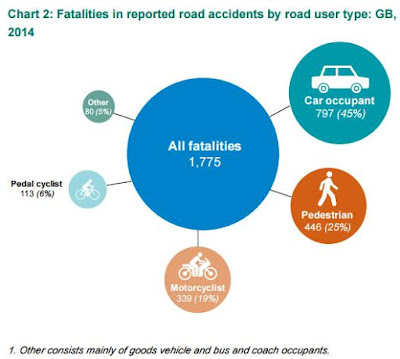 What I can't find is the chart showing what other party, if any was involved.

I know that the 446 pedestrians who were killed in road accidents in 2014 were in a collision with a motor vehicle, horse rider or pedal cyclist - did 400 die in a collision with a horse and rider, 40 with a cycle and rider, and 6 with a motor vehicle and driver/rider? I know these people collided with something under the control of another person, because if they tripped and died or collided with another pedestrian and died  they won't be included, but  I can't see that detail in the report.

Of the car occupants, how many were killed in a collision with a horse rider or cyclist?

Were the pedal cyclists killed in collisions with pedestrians and cyclists mainly, or with motor vehicles? Or did they die from falling off their cycles with no other vehicle involved?

I'm sure the stats are somewhere in the report, but I haven't been able to find them and nor has Horace Champion. Can anyone help? 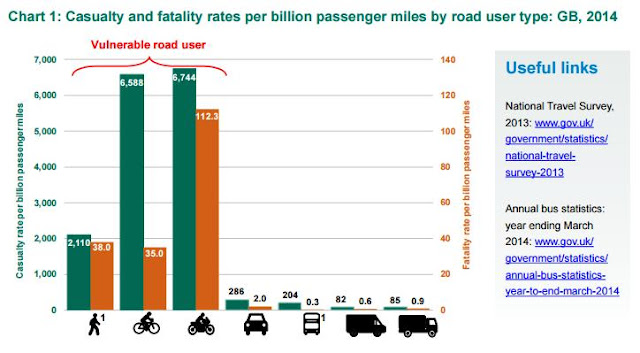 UPDATE
Thanks to Twitter and @jitensha_oni who found this spreadsheet which, from a quick look, appears to have the data for 2014 and earlier years too
https://www.gov.uk/government/uploads/system/uploads/attachment_data/file/462523/ras40004.xls

Posted by Charlie Holland at 22:24