I came as close to a collision as I have in a very long time tonight. A pedestrian ran into the centre of the road from behind some parked cars. She wasn't looking as she was running across the road. If she had looked before leaving the pavement she wouldn't have seen me as I couldn't see her because of the legally parked cars in the cycling superhighway blocking our view of each other. Thanks to my training I was well in the middle of the general traffic lane and had time to bellow nonsensically while doing an emergency stop. 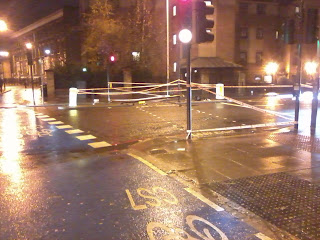 On the cycle Bypass at E&C a motorist and a pedestrian crossing had collided. The car, which was on the pavement when I first saw it had been taken away but the damage remained. The crossing had been taped off to pedestrians and the lights were stuck on green for the motor traffic, meaning that pedestrians and cyclists on the superhighway had to gamble their way across the multiple traffic lanes. Why didn't the authorities put the motor traffic lane on red and force the motorists to decide when the way was clear? (By the way the light at the bottom of the traffic light in the picture above isn't a green light, it's TfL's sign, for cheapskate reasons, prohibiting cyclists from a desirable right turn into the bus and cycle lane). 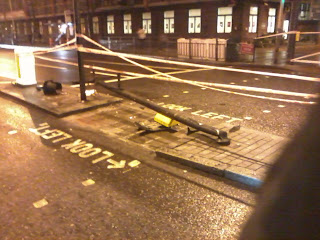 Further up the road just before Southwark Bridge, under the railway bridge, roadworks are going on. Where are the signs telling the bloody motorists to get out of your car and push it, like the cyclists are asked to do for some lack of reason. 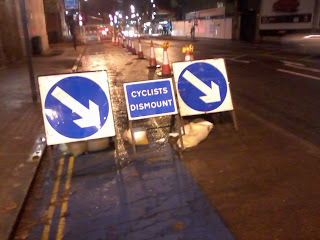 Finally, in the City of London, the cyclist push-and-wait traffic lights at the junction of Queen Street and Queen Victoria Street weren't working as has been the case for a good three weeks now. Clearly no-one in the City's highways department cycles over Southwark Bridge in a month of Sundays.

This kind of shit provision and consideration for cyclists and pedestrians is another reason why I'll be at the Vigil outside Kings Cross at 6pm this Tuesday.

If anyone from TfL or the City of London reads this, as well as everyone else, please go and see the wonderful film 'Urbanized' at the Barbican to the 23rd December, to see what changes are needed and why London's cycling and walking provision needs major improvement, not tinkering while smoothing the car carnage.
Posted by Charlie Holland at 22:05