The Vauxhall, Nine Elms, Battersea Opportunity Area continues to take shape with buildings going up and planning applications going in. Meanwhile we continue to await the finalised Planning Framework that developers are working to.

A planning application has just been made to Wandsworth for One Nine Elms (illustrated above). In the background is 'The Tower' at St George's Wharf which is under construction and on completion will be a metre taller than the Gherkin.


Meanwhile Lambeth has an application in for the 3 acre site between Bondway and Wandsworth Road, called Vauxhall Square. 604 flats; 416 student rooms; 500 seat cinemas; shops, 438 room hotel....Car Park entrance ramp, taxi drop off point and servicing along Bondway.
Cunningly the Vauxhall Square website has no images showing the height of the buildings planned, so here's one from a year ago (though without the proposed One Nine Elms, Kylun Towers and other skyscrapers planned for this area). 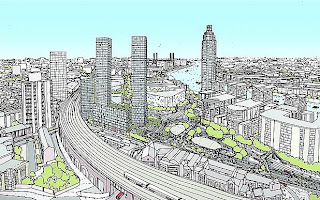 I'm not going to argue about whether there should be these tall towers or whether the planned population density is too great here. What I do want to see is a detailed plan of how cycling will be encouraged and facilitated across the whole area, and motor traffic reduced and calmed.

I know for example that Vauxhall Square propose 1096 cycle parking spaces predominantly on basement levels one and two. The plans suggest there will be 10 ground level short-stay stands on their property and a further 44 racks on the highway. But, given there will be some 16,000 cycle parking spaces for the homes along the VNEB corridor, is this sufficient short-term parking? Does the masterplan for the area intend people to be using their bikes or leaving them in the basement of their flats?


I'm also intrigued as to how cycling is perceived in relation to the Linear Park. I note, for example, that the Vauxhall Square application shows a one-way cycle crossing from their bit of public space into the Park - i.e. you can cycle across Wandsworth Road into the park but not the other way into their square. Do they intend to ban cycling at all times through their patch, or is another mellow cycle route planned from the Park. What are the other developers planning for their patch of the Park?

Will Nine Elms Lane have beautifully smooth, wide cycle lanes? Will Vauxhall Cross become a pleasure to cycle through, rather than a gruesome gyratory?

What news on the pedestrian/cycling bridge mooted to cross the Thames? Will it be a reasonable width for walking and cycling, or as skinny as the pedestrian only Wobbly Bridge between Tate Modern and St Pauls?

Will the ENVAC style vacuum waste disposal system that also sucks dustcarts off our streets be going in throughout the area? I can find no sign of it in the Vauxhall Square plans (or any drinking water fountains for that matter).

I really, really hope that Wandsworth, Lambeth, the GLA and the developers are putting as much time and effort into making this area a cycling nirvana as they are clearly putting into the hugely expensive Northern Line extension. They are unlikely to get a similar opportunity in the future.
Posted by Charlie Holland at 12:57