A practical solution to Westminster Bridge Ice Creaminals, but is if fair? 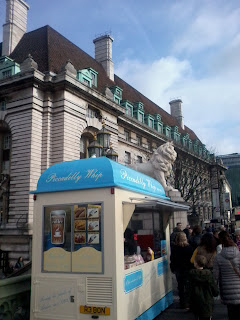 Readers of this blog over the past couple of years will know that I've marvelled at the inability of the authorities to stop Ice Cream vans parking and trading on the red route in the cycle lane in the bus lane on Westminster Bridge, part of the the high security zone around Parliament.

I'm delighted that a seemingly sensible solution has been found, given the clear demand to purchase ice cream at this spot. A stall has been erected on the pavement at the base of the Coade stone lion.

I want to be reassured however that the decision to award the contract to Piccadilly Whip followed a fair and reasonable process and that they're paying through the nose for the pitch.

If you look at the photos of the ice cream vans trading where they shouldn't park you'll see one company time and time and time again. That's right, Piccadilly Whip.

I doubt any competitor in a tender process could more accurately judge the potential income from the site than the company that has parked in breach of the regulations to trade there over many years. That's assuming there was a tender process rather than Lambeth or TfL just striking a convenient deal with the culprits.

I can't help but wonder whether Piccadilly Whip will have the gall to add a van or two on sunny days that have the tourists out by the million. Watch this space!

UPDATE
South Bank Employers Group (SBEG) have let me know they are responsible for the pitch on Westminster Bridge.  They say,


"The pitch is one of four and is part of a pilot project to reduce illegal trading in the South Bank by licensing a small number of pitches in trading hotspots.  We have not yet completed the evaluation of the pilot, but at this stage, as you point out in your blog, it seems to have been successful in reducing the problem of ice cream vans pulling up on the Bridge and blocking the cycle lane, which I know you have a particular interest in.
I can assure you that the selection process for the pilot was transparent and fair.  We interviewed a number of different traders and selected the two that best met the assessment criteria.
Once the pilot is complete in March I can be clearer about whether we will seek to extend the scheme, but it would not be appropriate to speculate on that yet as this is a matter for the SBEG board."

Posted by Charlie Holland at 14:09