The devil's in the detail with planning applications 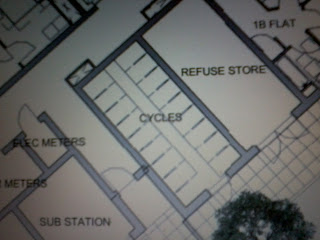 An application (12/00054/FUL) has been made by Dolphin Square Foundation for 130 - 138 Newington Butts (just before Cycling Superhighway 7 northbound branches onto Courtyard Row to avoid the E&C roundabout).

The proposal, which I broadly support, is for


“the demolition and redevelopment of the site comprising a part five storey, part six storey building and basement for the purpose of 76 residential units comprising 41 x 1-bed, 29 x 2-bed, 4 x 3-bed and 2 x 4-bed units, together with 500 sq m GEA of retail (Class A1) use."

Given the excellent public transport they intend to provide no car parking spaces, beyond disabled parking, and one cycle parking space per residential unit in line with the minimum standards required by Lambeth. One may quibble about whether this is enough. Encouragingly the cycle parking is on the ground floor, rather than down a flight of stairs in the basement as I've seen in other planning applications.

However the photo above shows one of the planned rooms. There may be enough room for the bikes but it's going to be a battle to get them in or out. There's a narrow central aisle with a single door exit (note the bin store has a double door) which opens onto a tree.

Below shows a bit of the wider plan. It appears that you leave your flat, go out of the front door onto the street then enter the building by another door to go through the narrow door to the narrow aisle to wrestle your bike out of its stand while hoping no-one else is trying to do likewise. It's not really making cycling the quick and easy transport option. 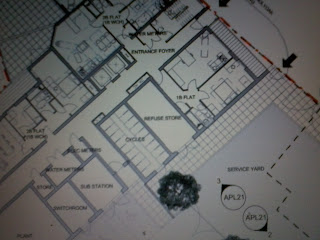 The plans also show no intent to provide Sheffield Stands outside the flats for short-stay use by visitors dropping in to pick something up. A similar situation has resulted at the nearby Dugard Way development I commented on recently.

The second bicycle store, while still let down by the single door to enter/exit that discourages child trailer use, for example, thankfully has more ample proportions. 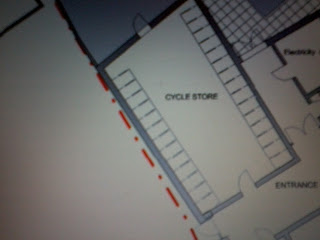 The final concerns I raised, using the measly 500 characters that Lambeth Planning allocate for on-line comments on planning applications, relate to the food store planned on Newington Butts. I asked for more pavement cycle stands than planned, given it's on a cycling superhighway, and sought reassurance that the store would not be restocked by lorries parking in the bus lane-come-cyclesuperhighway.

Let's see how this plans develops (and I hope the food store isn't another Tesco,)
Posted by Charlie Holland at 23:58