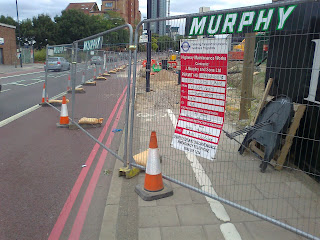 A fortnight ago I commented that cycle friendly measures clearly weren't at the forefront of the mind when starting building works at Nine Elms, with a pavement and bus/cycle lane being taken out of action for nine months.

I wrote, "Those in authority have no ambition for Vauxhall, Nine Elms, Battersea to become the new Amsterdam. They just don't want mums and kids, pensioners and commuters in London's biggest regeneration scheme walking and cycling around.."

I was wrong. Yesterday the Mayor of London tweeted that Vauxhall, Nine Elms, Battersea is to be more cycling friendly than Amsterdam.

Cycling down Nine Elms Lane today I was pleased to see the first small step has been made towards this, outside the former Post Office building site where a little of the bus/cycle lane has been restored.. 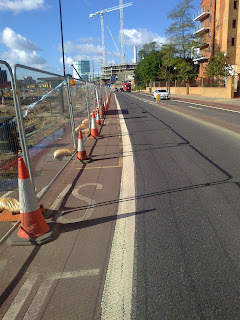 The developers of Embassy Gardens also deserve points for trying. They've put up a (slightly self-promoting) sign to highlight the end of a cycle path. I think we can see they don't yet quite understand how the Dutch do these things (let alone how to meet the Mayor's commitment to do better than them) but at least they're having a go.. 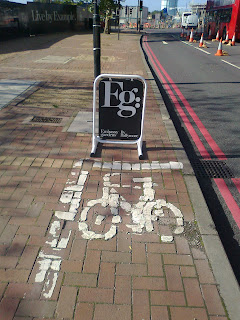 Posted by Charlie Holland at 15:37