A five-year-old boy was killed when he was hit by a lorry in south-east London.
Police believe Hichame Bouadimi, from Southwark, was walking with his mother when he tried to cross the road as the flatbed lorry approached.
The accident happened in St George's Road in Elephant and Castle at about 15:45 BST on Wednesday.
The lorry driver, 46, was arrested on suspicion of causing death by dangerous driving and has been released on bail.

Hichame was a pupil at Charlotte Sharman School, one of three primary schools and a secondary school that snuggle up to this fairly short, but wide, straight, one-way (speed tempting) road off the Elephant and Castle mega roundabout. 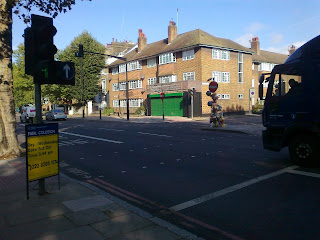 Transport for London very recently removed the railings from the crossing but made no changes to alter the motorway nature of the road. You can see a concrete plug where a railing was removed in the photo below, to the bottom left of the 30mph sign.

I blogged at the time that removing the railings was TfL's equivalent to rearranging the deckchairs on the Titanic. For example, the speed limit remains, nominally, 30mph though, given the road design and lack of enforcement I'm confident that's flouted daily.. 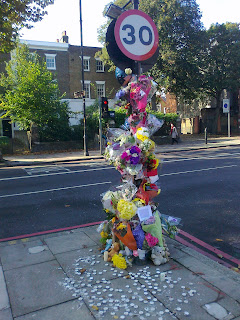 I don't know sufficient details of the crash to comment on whether or not the absence of railings was a factor in the collision.

I have been told that skid marks from the lorry remain visible, and presume these are the ones, 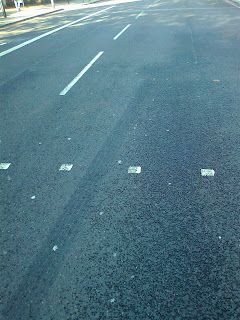 as they end by the location of the flowers. The point I am standing at, in the photo below, is where the skid marks start. 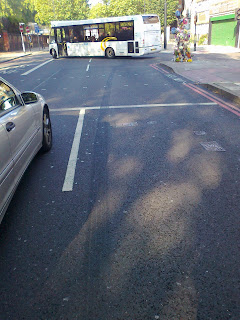 There is a petition you can sign at Charlotte Sharman School calling for changes to be made to reduce the likelihood of another child being killed on this road. Please drop in and sign it.