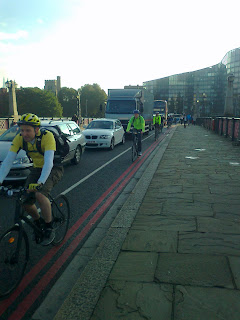 This post is a follow up to one I did a couple of days ago about TfL's plans, which are under consultation, to change the roundabout at the northern end of the bridge, in Westminster.

This morning I stood on Lambeth Bridge for forty minutes, from 8.25 to 9.05, analysing the motor traffic going towards Westminster (except motor bikes).

In that forty minutes 358 motor vehicles passed me and, whilst I wasn't counting them, I'd be very surprised if it wasn't a similar number of bicycles.

The thing is, every bicycle I saw had full occupancy -  a bicycle designed to carry one, with one person riding it.

By comparison, most of the motor vehicles were hugely under capacity - in fact over half of the taxis/mini-cabs didn't have even a single passenger.

The type of motor vehicle; total number of that type; and occupancy was as follows:

Car: 118 of which 81 (68%) only had a driver leaving all passenger seats unoccupied. Of the few cars with passengers, most appeared to be on the school run.
Van: 104, most with one or two occupants, and an unknown quantity of essential, heavy items to move..
Taxi/cab: 87 of which 49 (56%) were empty, bar the driver. 32 of the cabs with passengers had just one (84% of cabs with passengers had just a single passenger).
Lorry: 24, most with one or two occupants and, presumably, stuff to carry around.
Bus: 19 (mainly single deckers), of which 10 were roughly full, 3 half-full, 6 quarter-full
Small coaches: 5, all empty bar the driver (okay, one had a driver's mate too)
Big coaches: 1, empty bar driver and his mate.

So, I'm not going to suffer any nonsense from TfL about putting in a cycle lane on Millbank roundabout affecting motor traffic capacity adversely. It's clear that a huge amount of the motor traffic straightforwardly needn't be there, and assigning it loads of space at the expense of clear, safe space for cyclists is a ludicrous thing to do given the CO2, health, pollution, economic  etc. reasons to promote cycling, never mind its comparative efficiency in terms of space use..

Posted by Charlie Holland at 12:44