Transport for London is consulting on the first of 100 dangerous junctions they are to redesign, with construction work scheduled to start in just four weeks time. It's the roundabout on the Westminster side of Lambeth Bridge and TfL's design just isn't anyway near good enough, so there's no time to lose. As soon as you've read this post please, please send an email to STengagement@tfl.gov.uk. 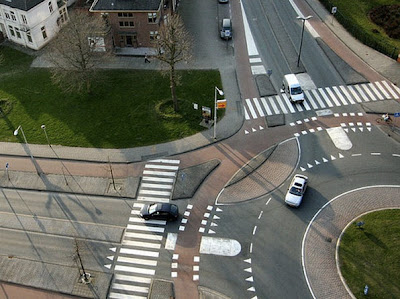 Rather than introduce a serious Dutch style street design, like the one above that allows cyclists to glide along in their own lane, TfL plan to give cyclists two options: either mix in with the lorries and taxis as now, or weave in conflict with pedestrians on the pavement and zebra crossings : 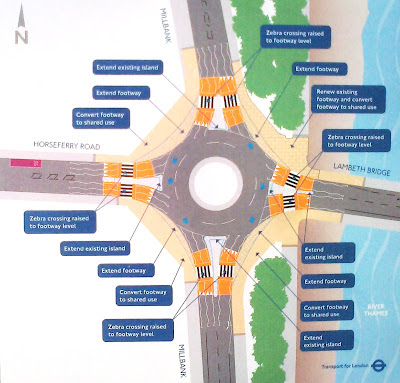 Cycle Superhighway 8 along Millbank will still just fizzle out as you approach the roundabout. And the cycle lane over the bridge from Lambeth will also fizzle out just as it does now at the start of the zig-zags to the zebra crossing, but with the option to cycle onto the pavement if you wish to irritate the pedestrians. 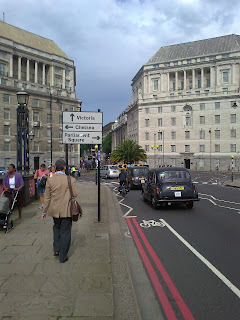 TfL's design allows three options should, for example, you wish to go straight on from Lambeth Bridge.

1) Stay where the cycle lane was, but has gone because of the zig-zag starting, and go straight ahead hugging the left hand side of the roundabout. Expect to get left-hooked by a driver turning left.

2) In accordance with cycle training advice, move from the cycle lane to take the centre of the nearside lane. Expect a driver to run into the back of you as they've forgotten you're there (as happened to me). Also expect to be shouted at for not being on the pavement. 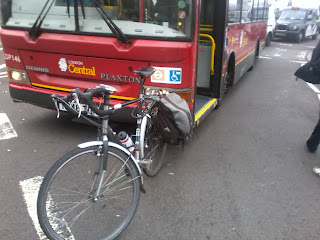 3) Cycle onto the pavement and cross on the zebra crossing with the pedestrians (it's not clear from TfL's drawing if you're meant to dismount), then cycle along the pavement and join Horseferry Road at some unspecified and seemingly unprotected place. Expect conflict with pedestrians and a tricky merger back into the main traffic lane.

I agree with London Cycling Campaign's view that, if the roundabout is to remain, this is a perfect location for a Go Dutch roundabout like the photo at the top, which I copied from the LCC blogpost. I can see teenagers, tourists and commuters happily and safely using the cycle lane as it is segregated from drivers, doesn't have pedestrian conflict, and is no slower than using the general traffic lane..

There can be no better place to start top quality cycling infrastructure than adjacent to the Houses of Parliament, where any MP not sensible enough to have cycled in the Netherlands yet can see for themselves what the future should be. Let's also remember that this roundabout forms part of this year's Diamond Jubilee Walking and Cycling Greenway - even more reason why it should be inspirationally good rather than badly compromised.

Now please email STengagement@tfl.gov.uk, with the heading Lambeth Bridge Northern Roundabout Consultation and tell them you don't like their plans but, if the roundabout is to remain, want a proper Dutch style design along the lines that London Cycling Campaign proposes.

If we accept a feeble, watered-down pastiche of 'Going Dutch' at this point, the next 99 dangerous junctions will be dealt with by TfL just as feebly. So please write!.

Also, check out the results of my snapshot survey, showing a very low occupancy level of the bulky motor traffic on Lambeth Bridge