I was lucky enough to be invited to a pre-season skate at Somerset House today, and grabbed the chance, not least because ice rinks are quite often cited as a parallel example of 'Shared Space' on our roads The theory is that by removing signage and kerbs, creating an ambiguous space without priority, people pay more attention and are more considerate to each other. This reduces collisions and conflict. 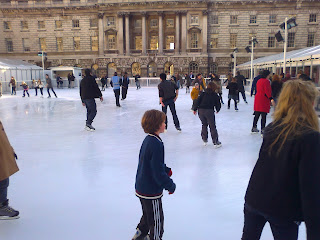 There's really only one stated rule at Somerset House; skate in an anti clockwise direction. Adults and children took the opportunity to try out skating, and some refreshed dormant skills.

Interestingly, given the slippery and hard surface we were travelling on, some quite speedily, there was no pressure on anyone to wear helmets. And there are no helmets available to use by anyone who wish to hire one. I was quite surprised to find a friend, who's very keen on cyclists wearing helmets, skating around without wearing one, just as erratically as I was.

So despite it being the first or second time on ice for many of the skaters, overall people felt happy to have children and adults mingling, and not to wear helmets or knee, wrist and elbow pads. The ice rink company's insurers are also presumably happy that the risks are acceptably low.

People who don't accept skating rinks as an analogy for shared road space tend to say that it's all well and good sharing space, except when there are heavy motor vehicles near the squishy humans.

The managers of the rink, who were so sanguine about people not wearing personal protective equipment, only allowed the ice-smoothing lorry on the rink after the people had left. If they let people and machines share the space they could probably get another session in each day and significantly increase their income. I suspect that they're seriously worried about the greater likelihood of serious injury from a collision between their vehicle and a skater, and also understand that skaters would hate to have to mingle with it. 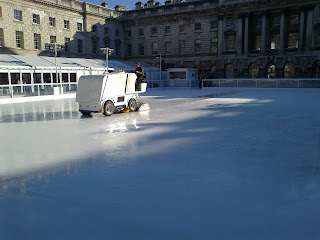 The other thing that was apparent was the high level of monitoring to ensure considerate behaviour by all users. There were three marshals on the rink in blue jackets - clearly anyone who skated aggressively would be challenged immediately. This is very different to the road situation where there is very little policing against  inconsiderate behaviour. 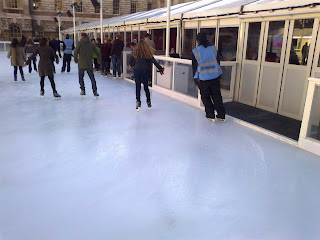 Lastly, you can get a very large number of people travelling around on a skating rink, but very few large vehicles.

If, as they must be, the authorities are serious about getting all people (nervous and confident) cycling more, the conclusions from an  ice-skating comparison seem clear:
1. It makes sense to segregate heavy, fast vehicles from people on foot, skates or bikes, either by allocating separate space or by zoning short periods of time for vehicles to make deliveries etc.
2. Helmets aren't really important
3. Have a good number of people checking for considerate behaviour and taking action against those behaving in a dangerous or off-putting way.
4. Where space is limited encourage people to move around in a way that uses space efficiently, and penalise those who hog large amounts of space without good reason.

We're looking forward to returning to the Somerset House ice rink again soon. I just wish that Transport for London would make the bridges over the Thames as friendly as the ice rink.

Posted by Charlie Holland at 16:28