Acid test time for Vauxhall, the Elephant and Castle, Superhighways and Quietways

"Lambeth will be the most cycle-friendly borough in London where 1- 100 year olds feel safe enough to cycle", Southwark wants "Stress free cycling for everyone" ....; and in 2012 Boris answered:

There are more road changes in this area being consulted on, or imminent, than you can shake a stick at.  Just look at this map: cycle superhighways in blue, Quietways in Green, Junction redesigns in black, the Vauxhall gyratory, and I'm sure there's more. 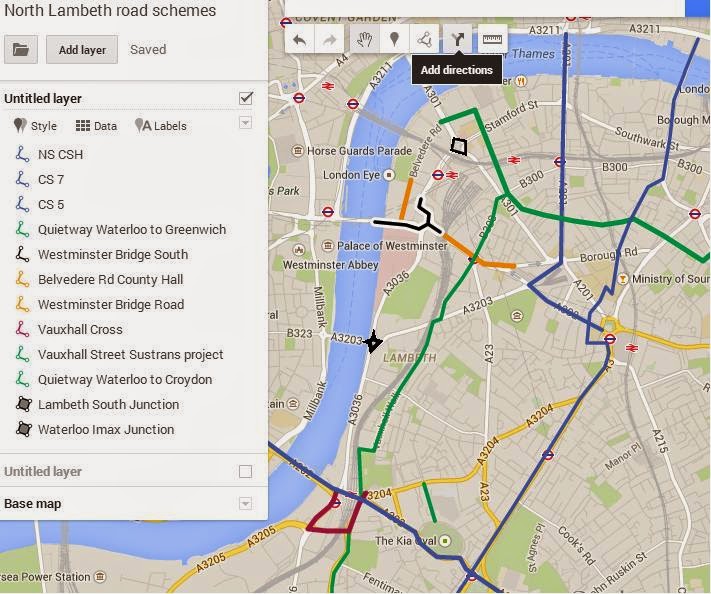 Alongside this, Southwark should have a 20mph limit on its roads within six months, while Lambeth is also on target to become a 20mph borough.

The acid test of these measures is whether they're done well enough for parents to encourage their children to cycle around this area - to school, to see their friends, to the South Bank, to Vauxhall City Farm, to the new swimming pool at Elephant and Castle; to Tate Britain and the Imperial War Museum, over the bridges to Westminster.

Some of the designs I've seen are, I think, good enough in parts to think that it will happen. And some frankly aren't yet. We know that one weak link in a route or a grid is likely to mean people won't let their children use it.

So it's absolutely crucial to respond to consultations demanding schemes that are so good that the designers will happily let their ten (or 100) year olds ride on them; and we've got to remind politicians of their policies and make sure they hold firm by them.

Here's a list of consultations I know of. Please get involved, with positive suggestions for improvements where you can, but at least take the time to simply demand that the final design is child as well as commuter friendly.

The consultation on changes to CS7 at the Kennington Road and Oval junctions has ended;
The consultation has ended for a Cycling Superhighway running north from the E&C over Blackfriars Bridge; The plans for the Elephant and Castle northern roundabout are out for a (maybe) final consultation;
Southwark have consulted on their section of the new Quietway from Waterloo to Greenwich;
Lambeth will (presumably) be consulting on their bit of the Quietway;
Funding has been secured via S106 money to improve the County Hall bit of Belvedere Road;
The Vauxhall CS5 (maybe) final consultation from Oval across Vauxhall Bridge has opened;
A consultation is just starting on the future of Westminster Bridge Road ;
The Westminster Bridge South and Lambeth Bridge South junctions are scheduled for redoing in 2016
Looking towards 2018, there'll be the redoing of Vauxhall Cross (a consultation on the principles for the abolition of the Vauxhall Gyratory has just opened) and the Waterloo Imax Roundabout.
Some of this forms part of the Inner London Grid, but there may be more.