Travelling telegraph poles and being nice to drivers

I'd normally let this pass, but a new tweet and press release from West Midlands Ambulance Service relates neatly to my blog post yesterday. 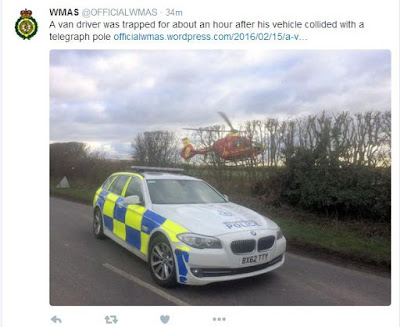 The inference, quite reasonably, is that the crash (not collision as the pole, typically inert, is not known to have been moving) happened to some extent due to the driver's actions.

It stops short though of saying that the driver "crashed his van into a telegraph pole" as there is a remote possibility that the crash was independent of the driver (e.g. part of the steering suddenly shearing).

If you read the press release the van comes across as being totally self-determining:


A West Midlands Ambulance Service spokesman said: “Crews were told that the white panel van was heading towards Warwick when it left the road and collided with a telegraph pole."

I sympathise with the Ambulance Service writer for wanting to soften the blow, avoid suggesting fault etc. but that's not what happened in the case of the child cycling by their school.

Posted by Charlie Holland at 18:15