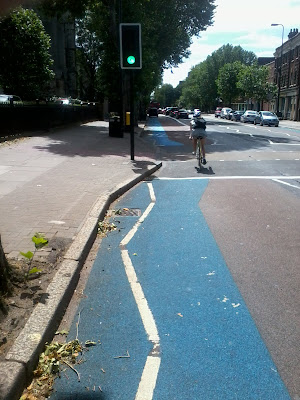 These blue areas have no legal status (unless they have a white line painted along them) but might lead an inexperienced cyclist to believe they should follow them. Given that, it would seem obvious to make the blue 'lane' wider rather than having a cyclist on it suddenly swerve with the blue paint into the rest of the bus lane to avoid the build out. After all it could make a bit of a mess if a motorcyclist is zooming down the bus lane (as they're allowed to do).
Posted by Charlie Holland at 21:02