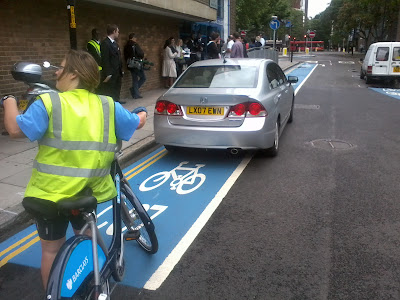 Today at 11.15 there were a handful of photographers and placard wavers outside South Bank University getting bored waiting for the Rt Hon Dr Vince Cable MP. Secretary of State for Business, Innovation and Skills and President of the Board of Trade, to come out from whatever he was doing in there.

His driver (according to onlookers) was parked, engine off, waiting for him also - just as I was giving a cycling lesson on one of the new Mayor's/Barclay's Hire Bikes to a prospective user of the Mayor's new Cycling Superhighway 7.

238
You MUST NOT wait or park on yellow lines during the times of operation shown on nearby time plates (or zone entry signs if in a Controlled Parking Zone) – see 'Information signs' and 'Road markings'. Double yellow lines indicate a prohibition of waiting at any time even if there are no upright signs.

a tram or cycle lane during its period of operation

I trust the driver will be disciplined by his employer.
Posted by Charlie Holland at 14:20