TfL yet to lick Ice Cream vendors or Waterloo Cars 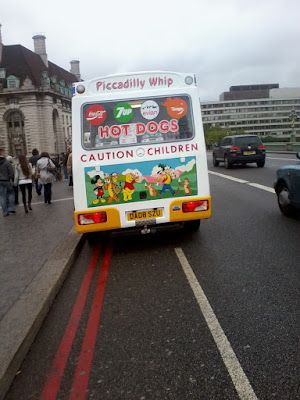 Last Friday was a damp, autumnal day - but not something to deter the illegal traders on the red route/bus lane/cycle lane on Westminster Bridge. I'd been noticing them continue to trade over the previous several days and so it was time for another quick photo.

And, given the abject failure by Transparking for London to block these organised criminals, I thought I'd better have a look at the new Superficial Highway which was always parked on by Waterloo Cars when it was a green cycle route, and now it's blue... it's still always parked on by the LICENSED minicab drivers. 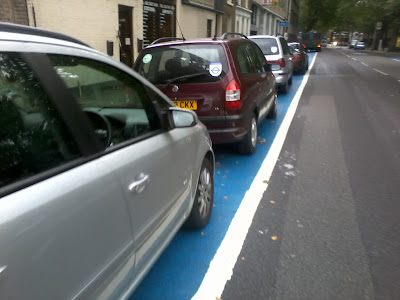 The two pedal police I spoke to who were lurking by the junction today told me they were there to catch cyclists jumping the red lights and, of course, parking by 'professional' drivers in a mandatory cycle lane on a yellow line was not the sort of crime that concerned them.
Posted by Charlie Holland at 22:06