Nurturing Cycling or Couldn't Give a Stuff? 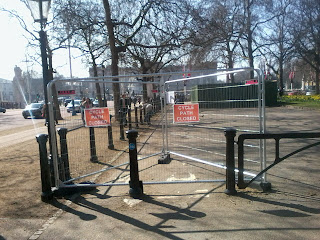 Royal Wedding preparations appear to be well under way and an early victim is the cycle path along the Mall past Buckingham Palace.

There's no warning until the closure and it would appear you're expected to lurch across a few lanes of traffic to mix it with the taxis. Unless you're meant to use the pavement?

I doubt the Royal Park, Royals or Westminster Council have given the closure that much thought. Just slapped up some barriers and CYCLE PATH CLOSED signs.

I'd hope, given the huge numbers of cyclists using that route daily plus the need to promote sustainable travel, that the authorities would be bending over backwards to nurture cycling through creating a temporary cycle path by taking one of the lanes from the motor traffic (as would happen in the Netherlands). 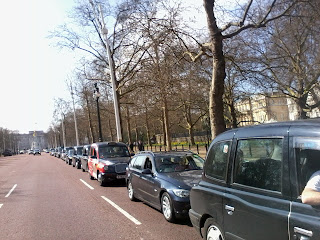 But I suspect that thought had never entered their minds and they're contentedly patting themselves on the back for putting up closure signs, unlike the previous royal event to close the cycle path.
Posted by Charlie Holland at 21:13